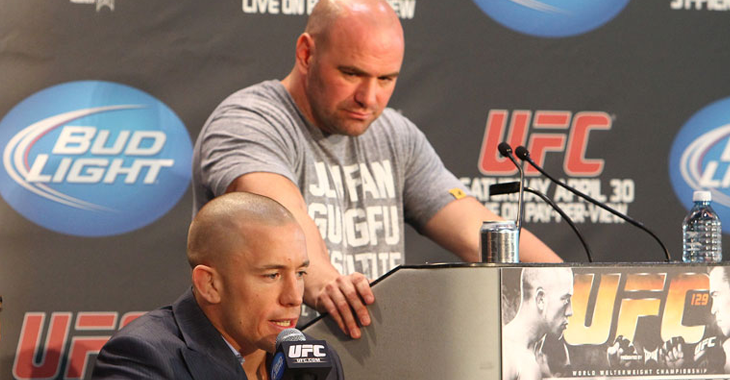 UFC middleweight champion Michael Bisping has been at war with the #1 UFC ranked middleweight contender Yoel Romero. From battles on social media, to Romero even calling in to Bisping’s podcast show, there has been a lot brewing between the two with no official bout announced.

Speaking with Ariel Helwani on Monday’s episode of The MMA Hour, “The Count” said that all signs are pointing to him defending his belt againt Romero next, unless former welterweight kingpin Georges St-Pierre has any say in it. “If the UFC were to come to me with a GSP, then I think I would take that one first simply because of the gigantic payday and then do Yoel next. But, I’m just hypothesizing,” Bisping said. “Odds are that it’s going to be Yoel Romero, my next fight. That’s what I’m assuming. I haven’t had any further dialect with the UFC but I know that Georges, his trainer told me recently that they are pretty much at an agreement with the UFC. So the deal’s almost done and he wants to fight me. I am the fighter they are targeting. So it is not beyond the realms of possibility. Right now, I will assume that Yoel is my next opponent, but there is always that wild card.”

Regarding his reasoning for choosing to fight St-Pierre rather than Romero first, “The Count” stated that it is simply a business play. With seeing Ronda Rousey and Conor McGregor getting a guaranteed fight purse of $3 million plus a share of pay-per-view buys, Bisping stated that he has yet to have a $1 million payday now as the current UFC middleweight champion.

Do you think that the UFC and Georges St-Pierre will come to an agreement and we will see Bisping defend his middleweight title against the former UFC welterweight champion? Sound off in the comment section!