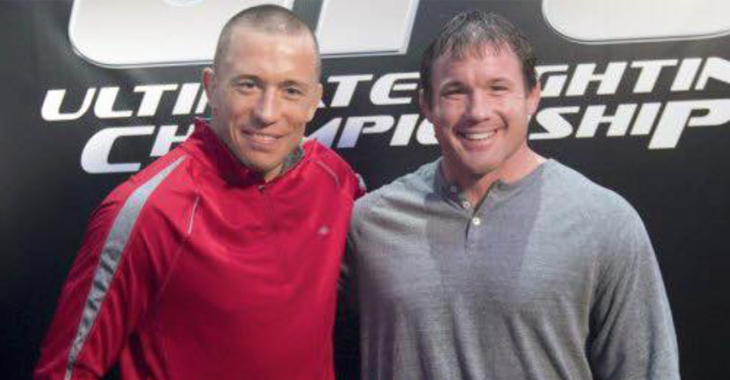 Hughes was driving a truck through a railroad crossing about 12 miles from his home in Illinois on Friday morning. Apparently, the crossing did not have crossing arms and Hughes was struck by an oncoming train on the passenger side of his vehicle. Hughes was then airlifted to HSHS St. John’s Hospital in Illinois. Hughes was in a coma following the accident and a member of Hughes’ family said on Sunday that the former UFC champion is stable and does not have any broken bones or internal injuries. The update also stated that Hughes was being weaned from his venilator. However, the update said that Hughes was “not yet awake and not responding” like they would like to see but were definitely seeing the “fight in him.”

The MMA community reacted and wished all the best for a quick and speedy recovery of the UFC Hall of Fame legend. Former rival, Georges St-Pierre sent his best to Hughes on Monday.

St-Pierre posted the following statement with a photo with Hughes on social media:

“We had tough fights but Matt Hughes is still an idol and one of the best there’s ever been, inside and outside the octagon. I have no doubt he’s going through this battle like the great champion he is and we all hope for a full recovery from this terrible accident.”

We had tough fights but Matt Hughes is still an idol and one of the best there's ever been, inside and outside the octagon. I have no doubt he's going through this battle like the great champion he is and we all hope for a full recovery from this terrible accident.

Matt Hughes is recognized as one of the greatest welterweights of all time, establishing himself as a dominant champion in the UFC. Hughes battled in competitive rivalries with both Georges St-Pierre and BJ Penn throughout his career. Hughes was inducted into the UFC Hall of Fame in 2010 and officially retired from fighting in 2013.