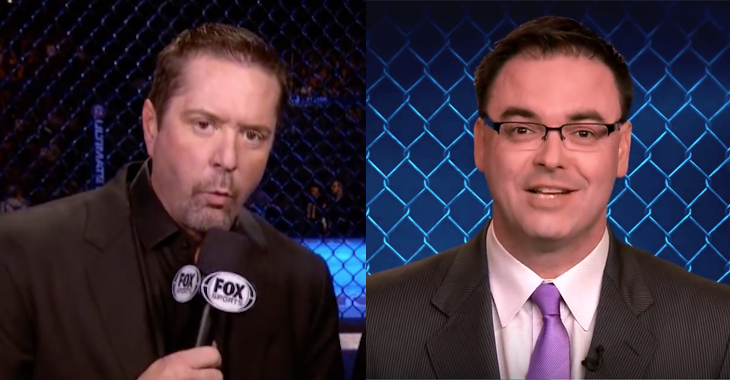 Many fans were excited to hear that MMA broadcasting pioneers Mike Goldberg and Mauro Ranallo were making their way back to calling live mixed martial arts fights for Bellator.

On Monday, Bellator released a statement revealing the roles for Goldberg and Ranallo for their big Bellator 180 and Bellator NYC broadcasts set for Saturday, June 24. From the Bellator MMA release:

With the recently announced additions of veteran commentators Mauro Ranallo and Mike Goldberg to the current Bellator broadcast team, fight night roles have been determined for the biggest evening in the promotion’s history when Bellator NYC: Sonnen vs. Silva and Bellator 180: Davis vs. Bader air live on Saturday, June 24 from Madison Square Garden in New York.

Earlier that evening, Goldberg is set to call the play-by-play action alongside Smith, with Ranallo set to host Bellator 180: Davis vs. Bader from the desk live on SPIKE at 8 p.m. ET/5 p.m. Goldberg and Smith will also call the additional preliminary match-ups on Bellator.com at 6 p.m. ET/3 p.m. PT.

Jenn Brown will host SPIKE’s live pre-show during preliminary action, where she will be joined by popular MMA personality Brendan Schaub and Bellator lightweight Josh Thomson, who will offer unique insight and analysis leading into the historic event. Schaub and Thomson will later join Ranallo at the desk during Bellator 180. The voice of Bellator, Michael C. Williams, will take his familiar position inside the cage as the evening’s ring announcer.

Will you be tuning in to catch Bellator 180 and Bellator NYC: Sonnen vs. Silva? Let’s get your predictions for your favorite matchups in the comment section!