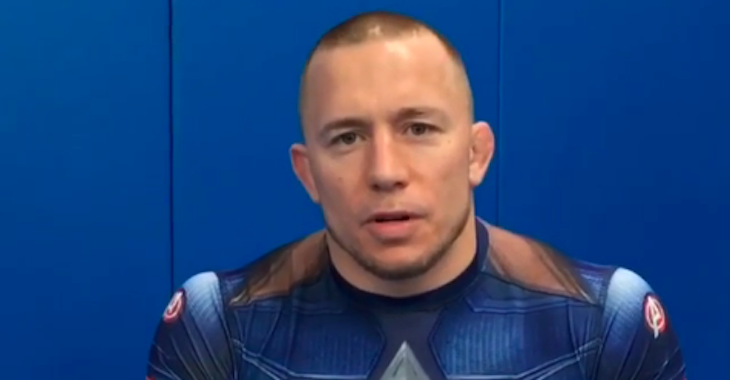 On November 4, in the main event of UFC 217, former UFC welterweight champion Georges St-Pierre will return from a multi-year hiatus to battle UFC middleweight champion Michael Bisping. If St-Pierre defeats Bisping, it opens the door to a number of other super fights, such as battles pitting him against Anderson Silva, Tyron Woodley, and perhaps most interestingly, UFC lightweight champion Conor McGregor.

As two of the biggest and most dominating stars the UFC has ever produced, St-Pierre and McGregor are often talked about as potential opponents for one another. In the opinion of Georges St-Pierre himself, however, this isn’t the most interesting option for him. He’s not keen on dropping down weight classes to fight smaller opponents. Instead, he’s interested in moving up to take on bigger foes, like Bisping.

St-Pierre explained this feeling in a recent interview with ESPN.

“Everything is possible but everybody is targeting Conor McGregor because the money,” St-Pierre said. “He’s the money fight. But I don’t challenge guys that compete in lower weight class divisions. For me, I don’t do that. I’m going up to fight Michael Bisping now. I’m looking up.”

“He’s an amazing fighter, it would be an amazing honor, but I don’t know,” St-Pierre continued. “I don’t know what to say. If the fans want it and he wants it maybe it will happen but right now, I’m focused on Bisping.”

This bout will mark St-Pierre’s first fight since a 2013 split decision win over Johny Hendricks. McGregor, meanwhile, has recently been busy. In his last mixed martial arts bout, which occurred in November, he knocked out Eddie Alvarez to capture UFC lightweight gold. More recently, he stepped through the ropes of the boxing ring to take on undefeated legend Floyd Mayweather.

Do you want to see Georges St-Pierre and Conor McGregor fight? If so, who do you think wins?