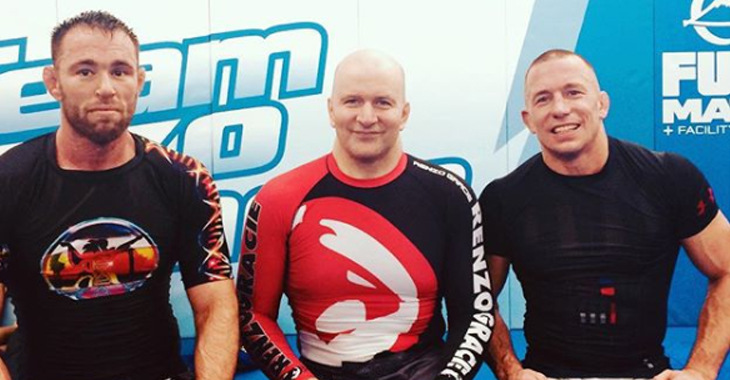 The status of UFC great Georges St-Pierre is still up in the air after the grueling process of moving up to middleweight contributed to contacting ulcerative colitis. This weekend, Luke Rockhold and Yoel Romero will be fighting for the interim version of the undisputed title St-Pierre handed over to Robert Whittaker. We knew that if GSP came back, it’d probably be at his old welterweight home. …But that’s if he came back. That question may have been partly answered today from the leader of the Danaher Death Squad, John Danaher. He posted a statement after a training session between St-Pierre and former foe Jake Shields.

“How would you do if you had to fight yourself? This is always an interesting hypothetical question — in the case of Georges St-Pierre and Jake Shields it is actually a practical question. I have never seen two athletes so closely matched in skill level, tactics, technique etc. in ground grappling. When they spar each other the only difference I see is their appearance and accent — other than that — identical. It’s great to see Mr. St-Pierre back in the gym despite his battle with ulcerative colitis.”

In NYC training with the squad!!! Big thanks to John Danaher for another amazing class! pic.twitter.com/YG01fpcN6W

“He has had to make considerable changes in his diet to lessen symptoms and still has to avoid certain modes of training, but his grappling looked great as he battled the squad and former rival and now good friend and grappling doppelgänger Jake Shields. It impresses me so much to see two great athletes who have a legacy so strong that they could easily stop training altogether and live comfortably as legends, come into the gym everyday and battle the youngsters — giving all of them hell on the mats — and then laugh together after giving each other hell with identical games.” — John Danaher via his official Instagram.

Could this mean that he intends on coming back to the UFC? Perhaps, but knowing Georges St-Pierre, he’s a lifelong student of the game. He was always in the gym even in the four years he was out, so unfortunately this doesn’t ease the suspense of wondering if GSP still has more fights in him. After all, he doesn’t need to fight for money and has nothing left to prove. At least we have this cool story of him grappling mat clone and multiple time world champion Jake Shields.