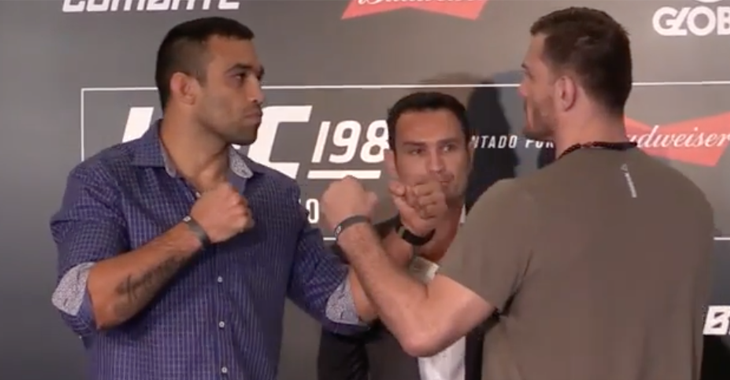 UFC heavyweight champion Fabricio Werdum says he is not looking past Stipe Miocic, but definitely feels that he has the advantage in every aspect of their fight.

Werdum is predicting a knockout over Miocic, but says that if it goes to the ground, it won’t go well for the Ohio fighter.

“I already see myself winning this fight,” Werdum said to Combate (transcribed by Bloody Elbow). “I see myself knocking Stipe out. But it all depends, we never know how it’s really going to be. But I do believe I’ll impose my gameplan and try to knock him out with a kick or something different. Or maybe I’ll catch him on the ground. I want to finish this fight as soon as possible. Of course I’ll be patient, I have five rounds to finish it and I’m aware of that. I know it’s not an easy fight, he earned his title shot. He has good boxing and wrestling, but I don’t see him as a complete fighter.”

“On the ground, for instance, I can’t see him with his back on the ground and doing well. He lacks some things. I also think he was awarded his shot. Of course he has two good victories, but he talked, too. He asked for it. He was smart, actually. I would do that, too. In the heavyweight division you can get a title shot after two wins. It took me a little longer. When I came back to the UFC, I had to win five in a row. Sometimes reporters ask me who’s next and I always say it’s up to them, not me.”

Who are you picking to win the heavyweight title fight at UFC 198? Share your pick with us and how it ends by leaving a comment!