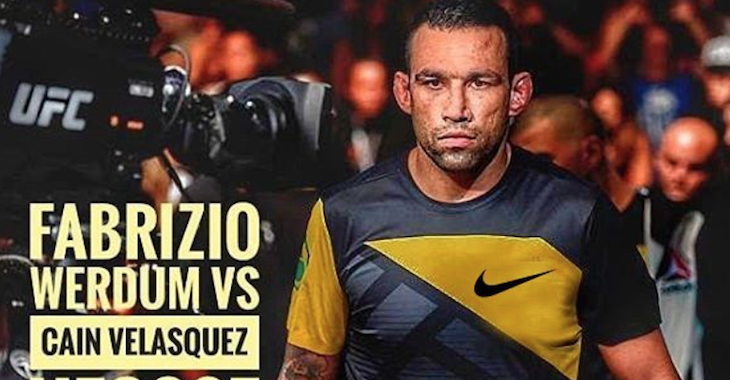 Former UFC heavyweight champion Fabricio Werdum made headlines recently when he took to social media with a photo of himself wearing a ‘Nike Fight Kit’ rather than a Reebok fight kit. The post was an obvious dig at Reebok, who the UFC currently has an apparel deal with.

The post was a controversial one, however, Werdum explained his intentions later in the evening in a separate social media post, saying:

“I was protesting. Actually, I’m not forced to use Reebok. I don’t have a contract with them. For people that don’t know, Reebok sponsors, well, sponsors, only during the fight and in the fight week you have to wear it [Reebok gear], it’s in the contract. In reality, I don’t have a deal with them to post outside the UFC. I can post whatever I want, if I want to post Kings MMA, I’ll post. If I want to post Nike or any other company or the sponsors I have, anything, so I’m not obligated.” Now, ‘Vai Calvao’ has opened up on the situation further in an interview with MMAJunkie, in which he revealed that he is actually in negotiations with Nike, after his money from sponsors was cut with the UFC’s apparel deal with Reebok.

“I also wanted to say that it’s important that other sponsors know that – sometimes other big sponsors don’t come to you because they think you have exclusivity with Reebok,” Werdum said. “I have no exclusivity with Reebok, it’s only during the fight and that’s it. Because that’s how it goes and we can’t do anything about it. But outside of the octagon, that’s where things show up the most, at social media, that’s where they show the brand, at training. It’s nice to clarify that, outside the UFC, I can have the sponsors I want.” The former heavyweight champ is currently slated to fight Cain Velasquez in a highly anticipated rematch at UFC 207 on December 30th, where he hopes to once again defeat Velasquez, and secure a heavyweight title fight with Stipe Miocic.