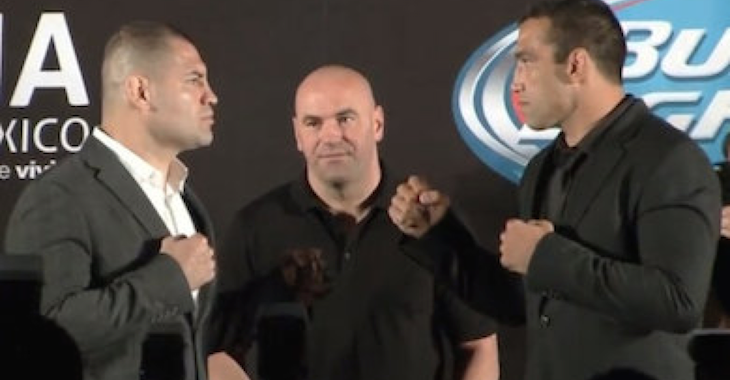 The heavyweight rematch fight fans have been waiting to see was made official this week!

Over a year after their initial meeting, where Fabricio Werdum shocked the world as he submitted Cain Velasquez to win the heavyweight championship at UFC 188, the pair will once again meet inside the Octagon.

The fight, which was officially announced by the UFC this week, will go down at UFC 207 on December 30th, which will serve as the UFC’s New Year’s Eve event, and will likely see one of the men crowned the heavyweight #1 contender, earning themselves a crack at Stipe Miocic’s heavyweight championship in 2017.

TWO of the best heavyweights in the world will meet again at #UFC207 in Las Vegas! https://t.co/Z6bozJ0yLn pic.twitter.com/PSnRCnfk5y

Following the fight, which saw him lose his heavyweight strap, Velasquez took over a year away from the Octagon before ultimately returning at UFC 200 back in July. At the historic event, Velasquez defeated Travis Browne via 1st round TKO in what was arguably one of the best performances of his career. While Velasquez hoped the performance would earn him a title shot with Stipe Miocic, he will now have to get through Werdum in order to secure a fight with Miocic and potentially earn back his heavyweight strap. Following his win over Velasquez, Werdum lost the belt in his first title defense to Stipe Miocic when he was knocked out in the first round of their UFC 198 scrap. Werdum returned to the win column several months ago however when he picked up an impressive unanimous decision win over Travis Browne on the main card of UFC 203 back in September.

UFC 207 is expected to be one of the biggest events of the year, with Amanda Nunes vs. Ronda Rousey set to headline the event in what will serve as Rousey’s highly anticipated return fight back to the Octagon following her year-long hiatus stemming from her KO loss to Holly Holm at UFC 193. At the present time, Werdum is listed as the #1 ranked heavyweight behind Miocic, with Velasquez being ranked at #2 behind Werdum.

Who takes this pivotal heavyweight matchup PENN Nation? Give us your predictions in the comments section below!