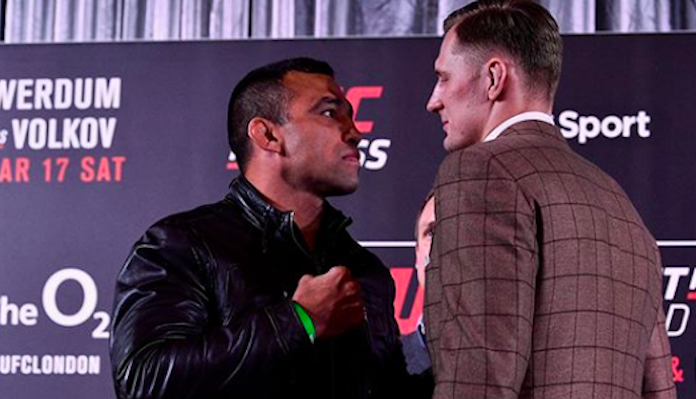 Speaking to MMAFighting in the wake of this loss, Werdum explained that he feels his lack of patience was one of the main factors that contributed to this loss.

”Not taking anything away from Volkov, he fought and and defended well on the ground, but I think that patience was my worst enemy in this fight,” Werdum said. “If I had more patience, I think the fight would have been different. I came back up trading punches with him right away, and I don’t think that was necessary. Breathe a little more. But that’s easy to say after the fight, but in there I’m the one that is feeling it.”

”I imposed my rhythm for three rounds, and I think I won the first three rounds, but I needed to breathe more,” he continued. “Like when you’re playing on PlayStation and your energy goes down and then goes back up again. I got back up and my energy was too low to trade punches like that. Again, not taking anything away from Volkov.”

Werdum also said his game plan was joggled by an elbow Volkov planted on his eye early in the fight.

”Another thing that disturbed me was my eye, he hit me with an elbow in the first round and that bothered me,” Werdum said. “In the third round, he hit me and opened a cut right below my eye, and I was going on autopilot. That blow affected my performance a lot, and that’s Volkov’s merit.”

Despite this loss to Volkov, however, Fabricio Werdum is still optimistic he can reclaim the heavyweight crown he once owned.

“I want to recover and get back in there as soon as possible,” Werdum said. “I have to talk to Rafael Cordeiro, with my team, with Ali, to decide when I’ll come back. I know that I’m one step away from the belt now, but I don’t lose hope. I have no doubts that I can become champion again one day. Of course that it will take two or three fights to get this chance now. I can’t talk about the belt now, I know I’m a few steps behind now.

What do you think the future holds for Fabricio Werdum?