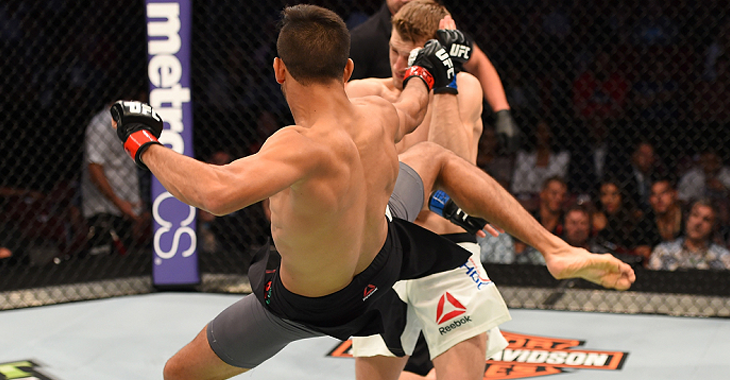 The 24-year-old phenom recently sat down with BJPENN.com’s Chris Taylor where he discussed a number of different topics including why he is very different from most fighters in the UFC.

“This is what I love to do,” Yair stated. “I don’t do anything else. I don’t go out. I don’t go out to party. I don’t have many friends. I have my training partners and my coaches. I don’t do anything but training. I just go from my house to the gym. Then come back to the house and take a shower and eat again. Then go back to the gym or do strength and conditioning or running or whatever I have to do. I just try and remain healthy.” “Sometimes it gets really very tough for me. You know of course I am young man. I am a 24-year-old kid. I have all these obligations to do and all of these dreams I want to achieve. At some points, you know I have thought about it, where I’m like I just want to stop everything and go have fun. But you know, when I think about it I realize that I don’t really need to have that type of fun. I am doing what I love and I have my family and my family is well. I can help out my family money wise and everything is just going in the right direction. So I don’t have to change anything as I can’t see anything going bad for me if I just keep doing what I am doing.”

Yair finished the interview by wishing all of his fans a happy and blessed Easter holiday.

“I just want to wish all of the fans a Happy Easter. May you all have a blessed holiday.”

Yair Rodriguez is coming off the biggest fight of his career with his win over former two-division UFC world champion BJ Penn at UFC Fight Night 103, which took place in January. “El Pantera” has gone undefeated in his career with the UFC and is 10-1 overall in mixed martial arts competition.

Meanwhile, Yair’s upcoming opponent Frankie Edgar has gone 6-2 since dropping down to the UFC featherweight division, with both losses coming against the current UFC featherweight champion Jose Aldo. Edgar last fought Jeremy Stephens at UFC 205 in November and won that scrap via unanimous decision. Edgar holds a 21-5-1 professional record in mixed martial arts.

“El Pantera” recently gave his prediction for his UFC 211 fight with “The Answer” and believes he will stop Frankie in the first-round with a flying knee.

Do you think Yair Rodriguez can become the UFC featherweight champion in 2017? Sound off PENN Nation!

This article first appeared on BJPENN.com on April 16/2017