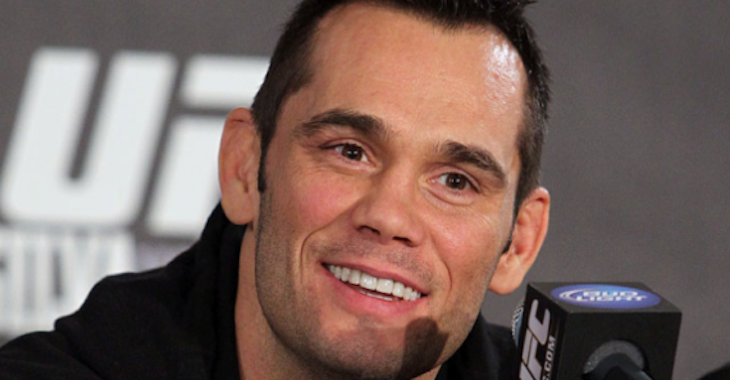 Over the last year or two, we’ve seen many aging legends of MMA return to the cage against younger, faster competition. The results of these fights have been varied, but the pre-fight outcries that the legend should be retiring instead of fighting are constant. On the latest episode of BJ Penn Radio, Rich Franklin – an MMA legend who has recently floated the possibility of a comeback – gave his take on when aging fighters should hang up the gloves.

“I think you should hang ’em up when you get to a point where it’s detrimental to your wellbeing,” Franklin explained. “I used to speak to my coaches about that. My boxing coach, Rob, I used to be like ‘hey look man, you’re the most in tune with my speed and my reflexes and stuff like that. So let me know, be straight with me. If there comes a day where you’re like, ‘look bro, you’ve lost a step’, and it’s time to step down, tell me. We never had that conversation. Since I never had that conversation with a coach, in my mind, I still have what it takes to compete and do what I need to do. But every athlete is different. Some athletes, there body is more beat up, they’re a bit run down, they lose a step, their reflexes aren’t there. Whatever it may be, they’ve lost their chin… the list goes on and on. I think that each of those athletes needs to have somebody in their inner circle that can give an objective point of view and just be like ‘look man, it’s time.’ And they need to be able to listen to that person. But that’s on an athlete to athlete basis.”

“After I lost my [UFC middleweight] title, I had a very successful career for the next six-plus years in the organization,” Franklin continued. “I was still main eventing cards. I was still main eventing cards all the way through the rest of my career. But I would get asked questions in interviews, ‘Rich, you know, you lost to Anderson [Silva] for the second time and you didn’t get your belt back, so when is it time to hang up the gloves?’ And I was like ‘just because I’m not a champion doesn’t mean I can’t continue doing what I’m passionate about doing. I’m still an effective athlete. I can produce wins and exciting fights and stuff like that. So you have to address that.”

“I’ve seen guys that come out of quote-unquote retirement and take another competition and they look great. They’re still able to go out there and throw down and keep up and that kind of stuff. And then there are other guys who are not [able to do that]. Those are the people, when you watch you’re like ‘damn, it’s time for you to ride off and just sit back and appreciate what you’ve been able to accomplish, and don’t try to hang onto the glory of your career.’ But the only person that can [tell an athlete] that is someone that’s on the inner circle of the athlete themselves.”

What do you think of the MMA legend Rich Franklin’s take on retirement?