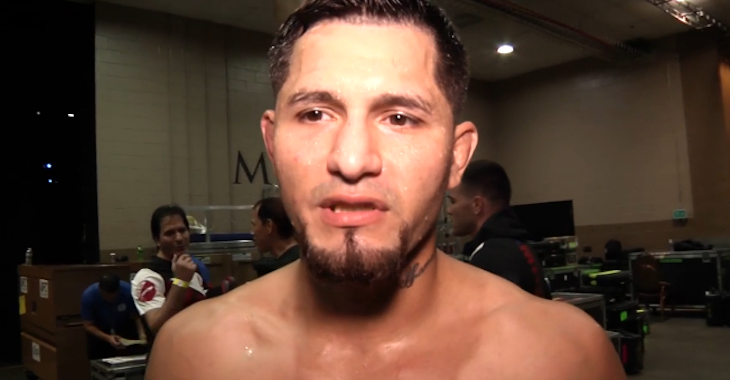 “If you’ve ever been poked in the eye, man, it sucks,” he said. “It sucks in practice, and it sucks even more in the fight. Depending how hard you get poked, you can man up and keep going –I’ve done things like that – but your vision is off. One eye is swollen at the time. For some reason, you’re getting that blurred double vision, because one eye is at a different focus than the other eye that didn’t get poked. That takes time [to recover from]. That’s not like, oh a second later, because the doctor looked at it and you said you’re ok. We’re only saying we’re ok because we’re fighters.

Masvidal then assured that the procedures surrounding inadvertent eye-pokes need to change:

“There needs to be a legitimate rule, if anybody touches the eye, well I should be able to get five to ten minutes,” he said. “The most important thing in the fight is vision. If I can’t see, well I’m going to get beat up, you know? It’s crazy. They need to do that. They need to stay on top of that. I don’t understand what the big nonsense is.”

“It’s BS. When I fought Larkin, he gave me a pretty hard eye-poke. I had to stop. The doctor came in, and asked ‘can you see?’ [I said] ‘Yeah, I can see,’ but I really couldn’t see at that time that he asked me. I had a big blur in my vision. But of course if I say I can’t see, I’m not fighting. So, I can’t see, and the doctors were like ‘ok let’s go fight.’ What do you mean ‘let’s go fight?’ Give me my fucking time. It’s not like I poked myself in the eye. What’s fair is to let me heal up. Let me say when my eye is ready. But they don’t do that. I think I had about 15 seconds, something like that, 20 seconds.”

“It’s something that they need to work on dramatically.”

Do you agree with Jorge Masvidal on this one? Is it time commissions took a real, hard look at the way eye-pokes are handled in mixed martial arts bouts?