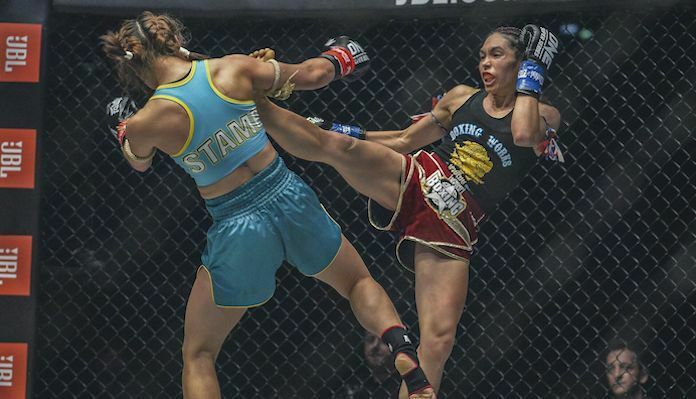 Stamp Fairtex is no longer a two-sport champ.

In the main event of Friday’s ONE: King of the Jungle card in Singapore, Stamp sought to defend her ONE atomweight kickboxing title against California’s Janet Todd — who she defeated by decision to win the ONE atomweight Muay Thai title roughly one year ago. It was an extremely competitive fight, with Todd finding success with her boxing and volume, and Stamp bludgeoning her challenger with a steady diet of leg kicks. Ultimately, however, the judges handed Todd a split decision victory. She’ll return to California with a ONE world title belt in her luggage, while Stamp’s dreams of becoming a three-sport champ are dashed for the time being.

While Stamp Fairtex is no longer a two-sport champ, her countryman Sam-A Gaiyanghadao is.

In the ONE: King of the Jungle co-main event, Sam-A picked the inaugural ONE strawweight Muay Thai title by defeating John Wayne Parr protege Rocky Ogden. This new title joins the ONE strawweight kickboxing title in Sam-A’s crowded trophy case.

Elsewhere on the card, we witnessed a significant upset victory from Kimihiro Eto, who picked up a first-round submission victory over former title challenger Amir Khan, and a devastating knockout win from Japanese-Korean veteran Yoshihiro Akiyama, who removed Sherif Mohamed’s batteries in round one.

Here are the full results of this ONE: King of the Jungle card — featuring Stamp Fairtex, Sam-A Gaiyanghadao, Yoshihiro Akiyama and other stars — plus some highlights where possible.

ONE: King of the Jungle results and highlights

Lightweight
Kimihiro Eto defeats Amir Khan via submission (rear-naked choke) at 1:39 of round one

Welterweight
Yoshihiro Akiyama defeats Sherif Mohamed via knockout at 3:04 of round one

Strawweight
Tiffany Teo defeats Ayaka Miura via TKO at 4:45 of round three

Welterweight
Murad Ramazanov defeats Bae Myung Ho via TKO at 4:53 of round one

Jeff Chan defeats Radeem Rahman via submission (rear-naked choke) at 2:00 of round two

Are you surprised Stamp Fairtex lost her title in Singapore?