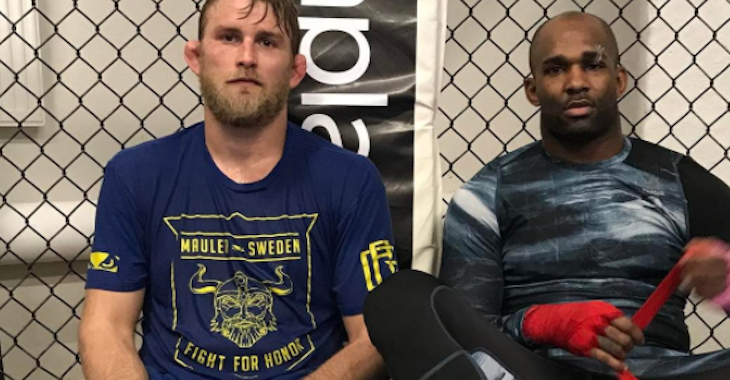 Last weekend, in the main event of the UFC’s latest trip to Stockholm, Sweden, Alexander Gustafsson put on arguably the best performance of career, lighting up Glover Teixeira en route to a fifth round knockout. Days removed from this fight, Jimi Manuwa, one of Gustafsson’s main training partners,  joined host Kinch on BJ Penn Radio. During his segment, Manuwa discussed his ally’s big win. Apparently, it came as no surprise to him.

“What you lot saw on the weekend, that’s what I deal with day, in day out,” he said. “Alex is the best in the world. I’m the best in the world. That came as no surprise to me. I had full confidence he was going to do it. The guy is so skillful and so strong and athletic that it didn’t come as a surprise to me. Alex is a beast, and I’m glad to have him, and I’m glad you lot saw that.”

With his win over Teixeira, Gustafsson reaffirmed his status as one of the most deserving fighters of a light heavyweight title shot. Given that Manuwa is also right there in the title picture, things looks like they could get a little tense between the two fighters. Apparently, however, they’re taking it all in stride. In fact, Manuwa says he’d be happy for Gustafsson if he jumped him in line for the next title shot.

“Gustafsson is a good friend of mine,” he said. “We train together. We happen to be two of the best light heavyweights in the world, and you know, I’d be happy for him to get the fight.”

Manuwa then discussed how he and Gustafsson will proceed if one of them wins the title.

“We’re not bothered,” he said. “We’ll cross that bridge when it comes. We’re brothers and we’ll deal with it, you know? If he gets the title, I’ll fight David Haye. If I get the title, he fights Jon Jones. We’ve both got big fights. We’re not worried about who’s getting the title, we’re just focused on making each other better and fighting for our families and all of that.”

“There’s no competitiveness or nothing,” he continued. “The only competitiveness we’ve got is in sparring, and in wrestling, and helping each other get better in grappling and strength and conditioning. We’re competitive in that way. We help each other to get to where we want to go.”

Do you think Jimi Manuwa or Alexander Gustafsson will win light heavyweight gold?