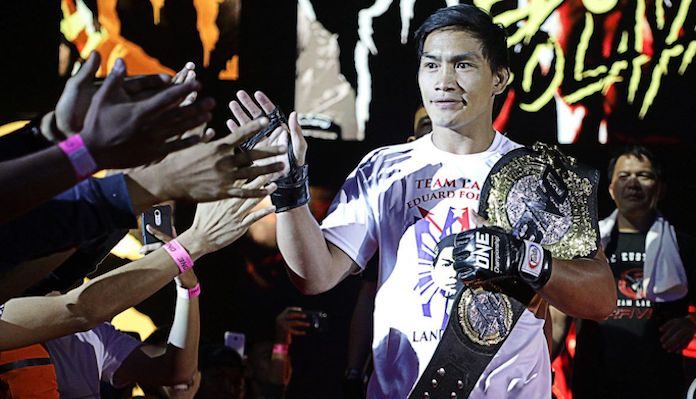 Eduard Folayang is once again the ONE lightweight champion. The Team Lakay representative recaptured the title with a thrilling decision defeat of Amir Khan, which went down in front of his legions of Filipino faithful in Manila in late November.

With the belt once again slung over his shoulder, Folayang is looking ahead to his first challenge as champion. That being said, it’s a little difficult to say who will provide that first challenge.

Originally, the next shot at the ONE lightweight title was expected to go to Japanese legend Shinya Aoki, who Folayang knocked out to begin his first title reign in 2016. In early November, however, ONE Championship announced plans for a lightweight Grand Prix in 2019. Aoki and the promotion’s other top lightweight contenders are all expected to partake in this tournament, yet it’s still unknown if the champion Folayang will compete in the tournament, or if he’ll await a fight with the tournament winner.

“I don’t know how will be the arrangement with it, because I am the lightweight champion now,” Eduard Folayang said on the latest episode of BJPENN Radio. “So, I will be just waiting for a couple of months, I think, or next year for whatever arrangement that will come. I can fight with Shinya, or I can wait. It depends on how the division will go, because I think it will be a busy year for the lightweight division. But, I don’t want to be stuck also. As much as possible, I want to take the opportunity to compete again.”

Depending on how the lightweight Grand Prix unfurls, one fighter Eduard Folayang could soon find himself in the cage with his Eddie Alvarez, the former UFC and Bellator lightweight champ, and one of the most high-profile fighters on the ONE Championship roster.

As you can probably imagine, this is a potential matchup that Folayang is very excited about.

A matchup between Eddie Alvarez and Eduard Folayang, two of the most consistently exciting fighters in the sport, would be a downright thriller for the fans. For Folayang, though, this potential fight is more than that. It represents an opportunity to truly cement himself as one of the best in the world with a win over a bona fide MMA legend.

“It’s a good opportunity for me, and it’s a good experience for me to be facing that kind of caliber,” he said.

As 2018 draws to a close, Eduard Folayang is looking ahead to 2019 and the lightweight Grand Prix. He believes this tournament will bring out the best in all of ONE Championship’s lightweights.

“Everyone in the division is hungry,” he said. “Right now they’re all preparing for it, so it will be a good opportunity for everyone in the lightweight division.”

The first round of the ONE Championship Lightweight Grand Prix is set to begin on February 22, when the promotion returns to its headquarters in Singapore with ONE: Call to Greatness.