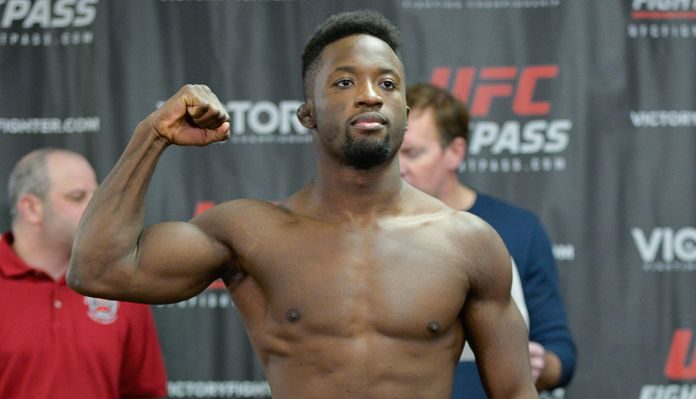 Sodiq Yusuff’s UFC debut was supposed to be an enjoyable time for him. He worked his entire life to get the pinnacle of the sport and was being flown out to Australia to fight at UFC Adelaide.

However, Yusuff found out his brother had passed away a week before his UFC debut. Yet even in the midst of this heartbreaking news, Yusuff never thought about dropping out of the fight and going back home. Instead, he was focused on the fight and making his childhood dreams come true.

“I just kind of bottled it all up. I tried to really not think about it,” Yusuff said to BJPENN.com. “That was the main thing, I just really pretended nothing was going on. The only time I would address it was when I was going into training and coming home and comforting my mom then going back to training. I was fully dedicated on the fight. The moment I touched down in Australia, the fight was the only thing I thought about.”

Yusuff ended up winning the fight by TKO in the first round. Once the fight was over, the emotions of his brother’s passing started to come forth.

“After the fight, when I was giving my post-fight speech it started spilling out, I was holding it back a little,” Yusuff said. “Then when I was done with the interviews it kind of hit me. I was suppressing my emotions for almost about a week and then it all kind of hit me at once.”

Although Yusuff found out of his brother’s passing before his fight, the original plan was for him not to find out until he got home from Australia. His brother was in a coma and his family decided not to tell Sodiq so he could focus on his UFC debut. However, news of this tragedy slipped out and Sodiq found out after his brother had already passed away.

He knew his family was doing what was best for him, but looking back at it, he still doesn’t know whether he would have preferred to know while it was all happening.

“Honestly, hindsight is 20-20. I understand the decision was made to help me just focus on my fight,” he said. “I can’t tell you one way or the other. Maybe if I had seen him in that situation it would have gotten in my head a little more. Honestly, I don’t really know how I would have felt.”

Although Yusuff was fighting two fights that night, one with his opponent and one with his emotions, it all played out how he expected when he won by stoppage.

“I was expecting a finish, I just wasn’t expecting a finish in the first round. I thought it would end up being a second-round finish,” Yusuff said. “After I hit him, sooner or later he would try and pin me against the cage or try to wrestle. The fight started with him trying to pin me against the cage. I just felt so much stronger than him and I was able to turn and get the strikes in. He obliged with a swinging contest in the middle. I always say I will do that with anyone on the roster, I will meet you in the middle. A lot of times I feel I will come out as the victor.”

After an impressive UFC debut, Yusuff is eager to get back in there soon. His hope is to get back in the Octagon in the next three to four months. He isn’t worried about calling anyone out. The plan is just to beat whoever the UFC puts in front of him and work his way up the rankings.

For now, Yusuff is back home comforting his mother and mourning the loss of his brother. He won the fight for his brother and plans to become a UFC champion for him as well.

“It was awesome, it was everything I expected it to be.”