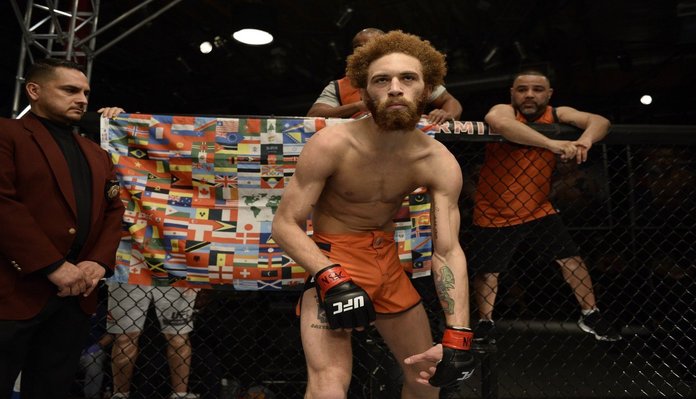 The Ultimate Fighter 27: Undefeated contestant Luis Pena entered the ranks of the stacked UFC lightweight division with a bang at the TUF 27 Finale with a first-round submission win over Richie Smullen.

Only five fights into his professional career, Pena is already beginning to make waves and develop a cult following largely due to his unique persona to go along with an electric fight style. The man known as  ‘Violent Bob Ross’ hopped on a call with BJPenn.com for an exclusive interview as he looks ahead to his future inside of the UFC.

Fresh off of The Ultimate Fighter, every contestant describes their time in the house very differently. What do you feel you took away from the experience? What were some good points and bad points?

“To be honest, I really enjoyed my time in the house, especially the time that I got to train before I hurt my foot. It really showed me just how big of a distraction certain things outside of fighting are in my life. Things like my girlfriend, my cellphone, video games, TV and all that. I would say it was all pretty good. I can’t think of anything that was bad. I didn’t like being away from my family and friends but at the same time, it isn’t the first time I’ve had to do that.”

You had one of the best performances at the TUF 27 Finale, finishing your opponent very quickly. How did you assess your performance and your growth from the show up to this point?

“I mean, it was good. I think it was a good performance. I would have preferred not to get taken down. But at the same time, it is what it is. I would say I’ve grown exponentially since the show. Especially getting to work at [American Kickboxing Academy], it’s definitely helped me grow from being a guy who’s good at wrestling to a guy who can mix it up everywhere.”

Prior to your fight at the finale, you accepted an invitation from Daniel Cormier to move your training camp to The American Kickboxing Academy in San Jose to train along some of the best athletes in the sport. The move is one we’ve seen often with TUF guys when they’re coached by someone who feels they have that “it” factor, something Cormier said you indeed have. What prompted you to make that move to AKA? How did you like the atmosphere of the gym and are you considering making it a permanent move?

“Without a doubt, I love it in San Jose. They embraced me and my family the moment I stepped into the gym. I would say it was a no-brainer to accept the invitation. When someone like DC invites you to come to be a part of his training camp, of course, you take that offer. I will say, I still want to be a part of my gym back home but I do kind of want to see about training full-time at AKA. At the same time, I do have a lot of loyalty to my gym back in St. Louis. The California lifestyle, in general, is right up my alley.”

Now that TUF is in your rear-view, what’s next for you? Do you anticipate fighting again this year or do you think we’ll see you back in the octagon in 2019? Do you have any opponents in mind for your next matchup?

“Most definitely I want to fight in November or December and I’d like to fight Mike Trizano. Nothing against him or anything, I just want to prove I was the best guy on the show. Looking past that, I’m looking to move down to 145. Without a doubt, I can make that weight cut. I woke up the day of weigh-ins at 158. I weighed in at 154. I don’t cut much weight at all.”

Being so new not only to the UFC but MMA as a whole, you’ve already developed this sort of cult following among fans. You’ve got the personality and electric fight style to go along with it that seems to draw people in. How do you stay grounded in a time of your life that’s so new to you? In a time where everything seems to be falling into place so perfectly?

“I don’t really find it all that difficult. I’m just a kid still. I’m only 25 so to me I take everything day by day. It’s not hard to stay grounded. It’s cool that everyone sees all this potential in me but at the end of the day I know what I have to do and I know what I want to do in my career to be considered one of the greatest of all time. That’s what I want and I don’t plan on rushing things.”

Watching you at the TUF Finale, you’re a very big lightweight. Even after watching you throughout the show, to see the height and size advantage you had over Smullen was still quite a surprise. We spoke on it briefly already, but how much weight do you cut? Is it difficult for you? You spoke of a potential drop to 145, how do you think that will affect your body?

“Right now, if I don’t train and I eat whatever I want, I get up to about 175. If I’m training I float at around 160-165. When I was making the initial cut, I started at like 160 the night before. I got down to 157 and I even drank a bit and got back to 158 and cut the last little bit. And that’s not even watching what I eat at all. Just making sure what I eat is clean. I feel if I truly minded my diet and got a nutritionist, I could make 145 with ease.”

Being so new in your MMA career, what do you feel is the next step for you in terms of your overall progression as a fighter? When you go back to the drawing board and evaluate yourself, what is it you feel you need to work on the most?

“I feel as though I could always be mixing it up a lot better. That’s the biggest thing I’ve always had a problem with. I stay in either striking mode or wrestling/grappling mode. I don’t mix it up enough. This is MMA and I need to learn to mix my wrestling in with my striking. I want it to all flow a bit better than it is right now.”

In past recent interviews, you’ve compared yourself to some of the greats in this sport. Guys like Jon Jones, Anderson Silva and another new talented fighter on the scene in Israel Adesanya as guys you look to emulate in your fight style. Where do these comparisons come from?

“Just the fact that I’m only about an inch shorter than Jones and an inch shorter than Adesanya as well. We’ve got the same body type and with me being at such a lighter weight I feel like I can do a lot of the things those guys do, but even more, considering my gas-tank can go a bit further. Especially the Jones comparison coming from the “tall, lanky wrestler” background I definitely look to style my game off of those sorts of guys.”

Rankings and weight classes be damned, if you could pick any fighter to go up against active or retired, who would that be?