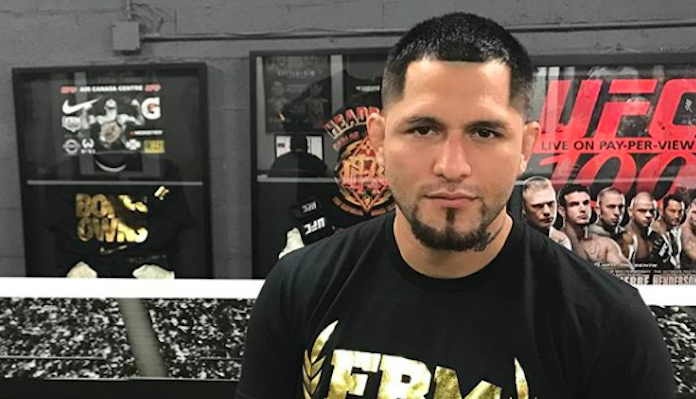 UFC welterweight contender Jorge Masvidal is tired of all the drama. Ahead of his long-awaited return to action, which he’s hoping will occur at UFC 232 on December 29, he’s determined to usher in a new era of no-nonsense fighting.

“I’m looking like I need to restore order in this sport, is what I’m gonna do,” Jorge Masvidal said on episode 101 of BJPENN.COM Radio. “Law and order. That’s what I’m telling you. I’m here to bring down the law and order. Good old fashioned ass whippings. No guns, no fucking Twitter wars, just these fists up your fucking nostrils. Just ass whooping. Good old fashion ass whooping, and I’m gonna bring a whole new community of people in there that are gonna appreciate that. They’re not gonna care so much for the talking. They’re just gonna wanna see people being violent with an art form to it.”

That, of course, doesn’t mean Jorge Masvidal won’t pipe up if somebody starts talking trash to him.

“That’s what I’m gonna try to do,” he said. “I’m not saying I won’t talk shit, because if somebody talks shit to me, I got a mouth too. I know how to use it.”

Jorge Masvidal’s feeling that talk has taken precedence over actual fighting, as you can probably imagine, has a lot to do with the recent drama of UFC 229, which reached a violent crescendo when Khabib Nurmagomedov, Conor McGregor and their teams engaged in a crazed brawl after the pair’s fight in the card’s main event.

While Jorge Masvidal admits that he doesn’t have a full picture of the drama that unfurled between McGregor and Nurmagomedov’s teams, he feels that McGregor’s training partner Dillon Danis might have been asking for the trouble he got from Nurmagomedov post-fight.

“Was it the best time [for Nurmagomedov] to do it? No,” Masvidal said. “But in the moment, the madness, maybe.”

“I don’t know if that dude Dillon, leading up to the fight, was talking hella shit to him and then he was talking more shit to him after then. And then Khabib was like, ‘fuck it bro, it’s on.’ You can’t get mad at him for doing what he does. He’s a fighter.”

Do you think Jorge Masvidal can restore order to the UFC after all the madness surrounding UFC 229?