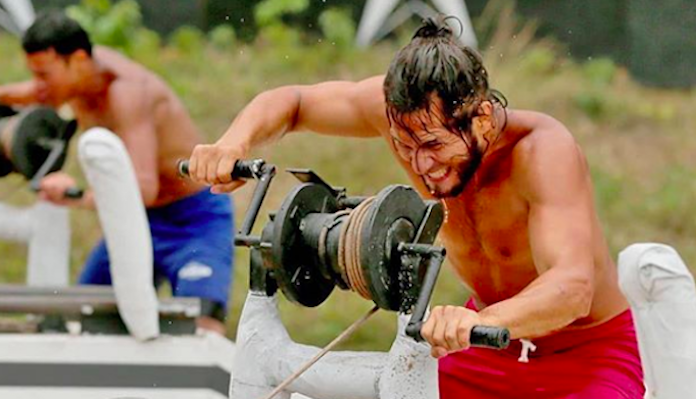 It’s been awhile since we’ve seen UFC welterweight contender Jorge Masvidal in the cage, but he’s been staying plenty busy outside of it.

He broke down his stint on the show on episode 101 of BJPENN.COM Radio.

“It’s like a Ultimate Beastmaster,” he said, explaining the premise of the competition-based show. “Have you seen that? It’s like a [American] Ninja Warrior. The whole day we’re in there, [following] their regimen. And we’re competing. It’s one team, the red team against the blue team. And it’s five guys, five girls, and you’re just competing for prizes the whole time long. And then there’s a grand finale prize and there’s mini prizes leading up to it.”

Like Masvidal, all the other competitors on the show were professional athletes. The welterweight and his fellow athletes would compete on parkour-style obstacle courses.

“You got like these parkour courses kind of,” he said. “The parkour people get offended when you call them that. I don’t know how to explain it, it’s just these courses that you run, you jump. You do everything from swinging off ropes, jumping into pools, jumping out, and it’ll always finish where you gotta throw objects. Like you have a baseball and you gotta drop like five pins and you’ve got five balls and whoever does it the fastest would score that one point for their team. And that’s all I did for 13 weeks, just compete in that. It was different type of competition but it was very elite for me because I’m going up against gymnasts, Olympians, parkour dudes that’ve been doing this their whole life.

“The national rock climbing champion of Mexico, phenom [too],” he added. “The kid was like 19 years old, 20 years old when he broke the record.

“Complete phenom. He’s on the opposing team so there’s a lot of talent when it comes to that world on that side.”

“It’s all athletics. And I’m competing against guys that have a good ground for that. From the Olympic gymnasts to the parkour dudes that are ranked in the world at that. These guys got a considerable advantage when it comes to doing these obstacle courses. And I think I’m pretty quick and stuff on a 400 or if I’m lifting weights at the gym, but the speed’s completely different compared to this. You almost seem slow at first because these guys are like bullets.”

While Jorge Masvidal admits he wasn’t always the fastest guy competing on the show, he felt like he had a clear advantage in the mental toughness department, especially given that the show controlled what the athletes ate. This is part of the reason he accepted the gig. That, and the money…

“The money was like beyond freaking right, like crazy dude,” he said. “Because the thing about it, I didn’t think — and I gotta thank my manager Abe Kawa who got me this because at first I didn’t want to do it. As soon as I heard reality TV, I was like you like, ‘no this doesn’t sound like it’s gonna be good.’ But then when he told me about the competition and how the food is given out  [by the production team] I was like, ‘I might have some advantages mentally because these guys might break, they might get tired.’

“I’m not gonna be bothered if all they gave me was rice to eat all day,” he added. “So I signed up and then when I got there I was like, ‘man this is not what I expected at all.’ Yes, that and their offer was very good. Me, win or lose, I was getting paid a very handsome fee weekly. And I was like, ‘I can’t get no fighting in. Maybe I’ll go on this show for like two or three weeks because I like these checks. Because they’re nice little checks, and then I’ll come back.”

While Jorge Masvidal only expected to spend a few weeks on the show originally, he wound up sticking with it for much longer. He made it 13 weeks before he was finally eliminated from the competition, and he says he was competitive the entire time.

“I lasted 13 weeks on the show,” he said. “I didn’t think I was gonna get that far. And then I started thinking, oh, I’m gonna win this thing you know. Once I got in there and the weeks started passing by because it’s a lot of factors that I’ve never done in my life.

“I was competitive all the way through.”

Now that his reality television stint is in the rear-view, who would you like to see Jorge Masvidal fight?