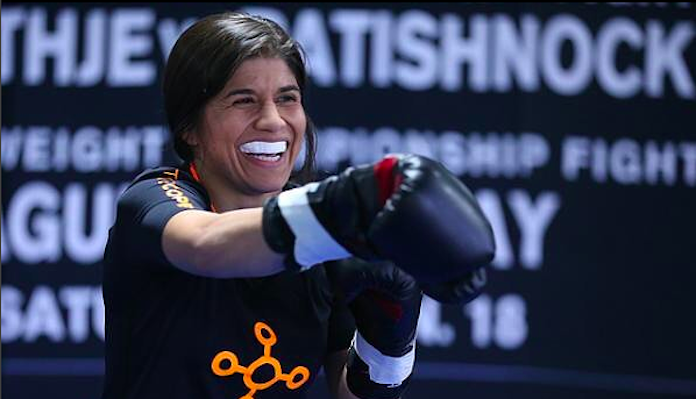 Former World Series of Fighting champ Jessica Aguilar has fought just twice since she signed with the UFC in 2015, and unfortunately, both of her Octagon appearances have resulted in losses.

Understandably, the strawweight veteran is keen to get back in there ASAP, and return to the kind of form that saw her collect 10-straight wins between 2010 and 2014.

“I just want to fight,” Aguilar said on the latest episode of BJ Penn Radio. “I want to stay healthy. I want to fight. I want another opportunity to get back in there as soon as possible, get the win, and keep moving on.”

As far as possible opponents for her long-awaited return to the cage go, Aguilar is willing to step in there with pretty much anybody. That said, she is also eager to rematch former UFC strawweight champion Carla Esparza, who she defeated in the Bellator cage in 2011.

“I’ve already beat her once, but she talks so much that I – she makes me want to get back in there with her.”

Whether she gets her desired fight with Esparza, or another opponent, Aguilar believes she can be back near the top of the strawweight pecking order with a win or two.

“I would say one or two [wins],” she said. “I would have to get back in there and win, do my thing. Take people out… one, two… I think I’d be back in the mix in one or two fights.”

Unfortunately, nobody seems willing to accept a fight against her – which is probably a testament to the many dangers she poses in the cage.

“I understand that they’re having a hard time [finding me a fight], but I’m sure there’s somebody out there that wants to make a pay check like I do, and wants to challenge themselves and get a fight. So hey, the old lady’s right here waiting.”

Who do you want to see Jessica Aguilar fight in her return to the Octagon?