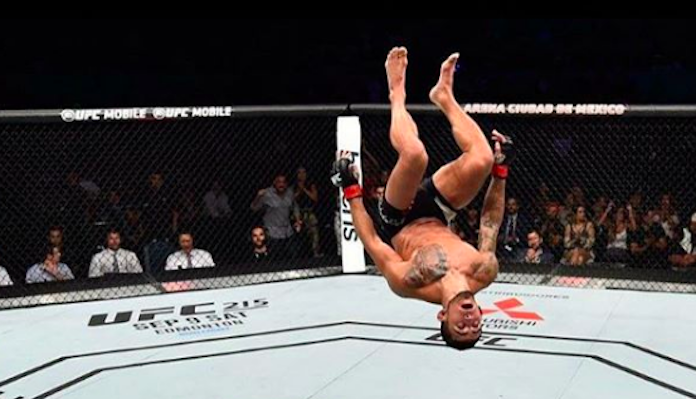 From the sounds of it, UFC flyweight champion Demetrious “Mighty Mouse” Johnson’s next title challenger could well come in the form of reigning UFC bantamweight champion TJ Dillashaw. Speaking on the latest episode of BJ Penn Radio, flyweight contender Sergio Pettis gave his take on this compelling flyweight title superfight.

“I mean it’s and interesting fight to make, I think it’s definitely cool for the fans,” he said. “Definitely a super fight.”

Sergio Pettis will next step into the cage on June 9, at UFC 225 in Chicago, where he will battle former title challenger Joseph Benavidez. While Pettis is focused on the task at hand, he does believe a win could earn him a title shot, and likes the way he matches up with the champ.

“Obviously, my goal right now is Benavidez,” Pettis said. “I am looking towards that right now instead of looking towards DJ. DJ’s got a another fight to worry about I believe with TJ [Dillashaw] or whatever. [If] they’re giving it to him next. But I think I do bring a different style to the table for DJ man. I feel like he has a little bit of trouble with the longer fighters, and I think that’s where I am, I’m a longer guy. I am very, very educated in the striking game and I think that’s where it’s a little different. He fought a lot of guys who are going to wrestle him, I’m going to go out there are try to strike with him. I think I have enough clean technique and clean striking and enough education to be able to do that.”

What do you think of Sergio Pettis’s breakdown of a possible Demetrious Johnson vs. TJ Dillashaw fight?