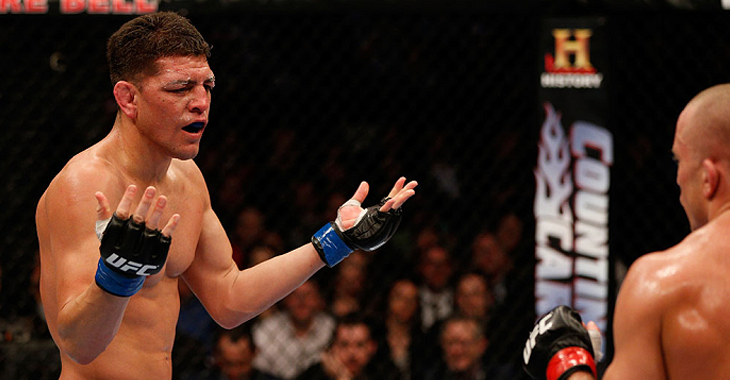 Mixed martial arts veteran Nick Diaz has not fought since January of 2015 where he and Anderson Silva fought in the five-round main event at UFC 183. Silva initially had his hand raised when the judges awarded the former middleweight champion a unanimous decision win but it was later overturned to a no contest after it was revealed that both Silva and Diaz tested positive for banned substances.

Silva tested positive for multiple banned substances including steroids while Diaz tested positive for marijuana for the third time in the state of Nevada. Silva and Diaz were both suspended and Diaz’s suspension just ended in August and is eligible to return to competition.

A long-time coach of the Diaz brothers, Richard Perez was a guest on BJPenn.com Radio this week and spoke with our host “Kinch” on Nick’s plans for returning to the Octagon. “Kinch” mentioned the talks of potential opponents for Nick being Georges St-Pierre and Michael Bisping but one that a lot of fans want to see is a rematch with Robbie Lawler.

“I do too,” Perez said. “Nick knocked him out and Robbie Lawler has been on a roll you know, until he fought Woodley. He just wasn’t expecting that and I would love to see that. I think it would be a good money payday right there.” “Kinch” then asked Perez for his thoughts about a potential fight with UFC middleweight champion Michael Bisping.

As far as a championship belt in the foreseeable future, Perez says once again that if the money is right, Nick will hold a title in 2017.

“I think he will because he’s hungry for it right now,” Perez said of Nick. “He’s hungry right now. He’s been out for a while so you know if you’re a fighter, you know, if you haven’t trained in a while and you’ve been fighting almost all your life, and all of a sudden you get a big break, you start getting hungry for it. It’s like not eating a steak for a month or two, you know? ‘I gotta have that steak, I gotta get it. I want it.’ So, I know he’s hungry for it. He’ll take it if it’s good money. If not, I don’t know what he’s gonna do but I know he deserves the big payday.” “They’re both [Nick and Nate] entertaining you know? People love to watch them,” Perez said of the Diaz brothers. “Whether they hate them or they love them, they love watching them.”