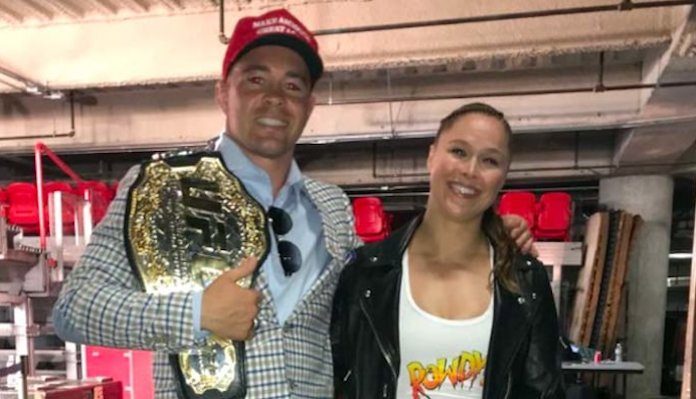 UFC welterweight star Colby Covington has long flirted with the idea of a move to the WWE ring, but these days, when he’s having an increasingly difficult time getting his long-desired title fight with Tyron Woodley, he’s finding a move to the pro wrestling world more appealing than ever.

He’s spoken to his training partner Bobby Lashley, as well as other WWE stars like Ronda Rousey and Paul Heyman, and he’s heard that the organization treats its athletes with great respect.

“That’s very true,” Colby Covington said on episode 108 of BJPENN Radio when asked if WWE was becoming more appealing than the UFC. “Just having Bobby Lashley on the ins and outs of the WWE and having Paul Hayman as a friend, and Brock Lesnar and those guys… Ronda Rousey, going to talk with her. [Hearing] how much Ronda Rousey loves WWE, and there’s no pressure and she’s treated fairly. She’s just like… she gave me such good words of wisdom last time I talked to her.”

If Colby Covington were to migrate from the UFC’s Octagon to the WWE ring, he would love to form a tag team with Rousey, as he’s previously stated. In fact, he’d love to team up with Rousey and take on Becky Lynch and Conor McGregor.

Lynch and McGregor, to remind, have recently discussed a tag-team of their own.

Call me when you need Proper back up.

There you have it.

Ronda Rousey and Colby Covington vs. Becky Lynch and Conor McGregor. Who you got?