While that may come off as sounding arrogant, there is no denying that “Mystic Mac” is the biggest star to ever emerge from the sport of mixed martial arts.

In fact, Conor McGregor may be the biggest sports talent ever produced by the great country of Ireland.

But don’t tell that to WWE Smackdown Women’s Champion Becky Lynch. The Dublin native has recently emerged as “The Man” in the world of Pro-Wrestling.

Becky Lynch has been busy feuding with former UFC women’s bantamweight champion Ronda Rousey in recent weeks and seems to be channeling her inner Conor McGregor while doing so.

Everyone writing love letters to each other on social media about #SurvivorSeries tonight. Well here’s my statement: I cannot wait to get out of doctor jail and rip all your faces off. Signed, The Man. pic.twitter.com/orSFn41CN1

With that said, Becky Lynch recently took to Twitter where she shutdown any talks of her new role as “The Man” having anything to do with her “Irish Brother”.

The proud Blue-brand champion jokingly said that if she ever got within 2 miles of Conor McGregor she would be forced to break his arm.

“The Man channels no one. @TheNotoriousMMA & me are bonded as Irish brother & sister. But if I ever got within 2 miles of him I’d break that bond, and his arm, in three short seconds. I’d be too tempting; he’d completely understand too. Proper12 after.” – Becky Lynch

Conor McGregor quickly responded to the “Irish Lass Kicker” by offering his services if she ever requires “Proper” back up.

Call me when you need Proper back up.

“Call me when you need Proper back up.” – Conor McGregor 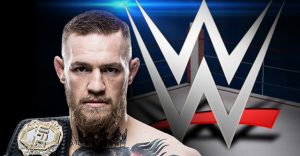 “Mystic Mac” recently made his highly anticipated Octagon return at UFC 229, but ultimately suffered a fourth-round submission loss to Khabib Nurmagomedov in his attempt to reclaim the promotions lightweight world title.

Despite his disappointing setback to “The Eagle“, Conor McGregor’s stock is still as high as ever.

WWE chairman Vince McMahon would probably love nothing more than to have Conor McGregor follow in the footsteps of Ronda Rousey and make the jump from UFC to sports entertainment.

Would you like to see Irish stars Conor McGregor and Becky Lynch teamup under the WWE banner? Sound off PENN Nation!