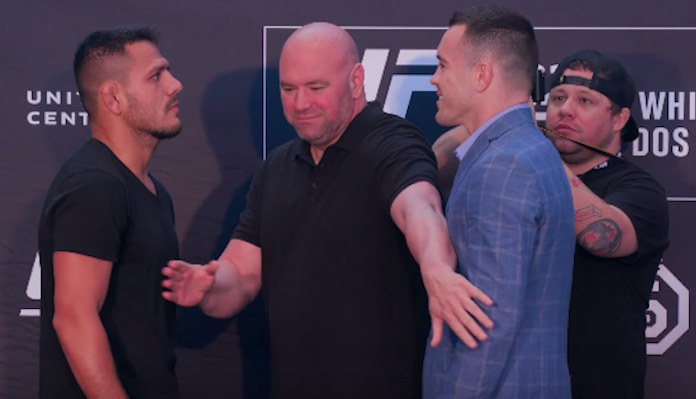 UFC 225, which went down on June 9 in Chicago, was an extremely stacked card. It was headlined by a middleweight showdown between champ Robert Whittaker and overweight challenger Yoel Romero, co-headlined by an interim welterweight title fight between Colby Covington and Rafael dos Anjos, and sweetened by a host of other fantastic matchups.

Surprisingly, however, the card is only reported to have sold something in the area of 250,000 pay-per-views — not a disastrous number, but certainly not a home run either.

Speaking on the latest episode of BJPENN.COM Radio, Colby Covington, who won the interim welterweight belt at UFC 225 and was considered one of the card’s bigger draws, gave his take on these relatively low PPV sales.

“It was a low ball estimate, but it looked like fake news to me,” Covington said of the card’s estimate PPV numbers. “I mean, at first they said 150 [thousand], and then they said 250. And we haven’t heard what it’s been since 250.”

“Did any other card this year even do 250 paper views?” he continued. “Look at [Daniel Cormier]… the greatest fighter of all time. He just fought Stipe, and I don’t know, who knows if they even got 250. So, I mean 250 is pretty good comparing to what’s been offering in the UFC.”

While Covington isn’t particularly disappointed with the card’s numbers, he feels that he was really the only real draw on the card. If there had been other draws on the card, it would have performed better.

“Robert Whitaker wasn’t selling any fights,” Covington said. “No one cares to watch him fight. He’s boring. He doesn’t sell fights. He doesn’t talk. Same thing with Romero, he doesn’t talk. He’s all shy, ‘Oh, I love you boy.’ He doesn’t even speak English, so Yoel Romero’s not selling no fights. And CM Punk, everybody already saw that show. Everybody saw him lose. Everybody knows he’s not a good fighter. He sucks at fighting. He’s a pro wrestler. So everybody saw that show. I was the only one on the card pumping the card. So all those buys were from me. 250,000 buys, that was all my work.

“So, I think I did a pretty good job, and that was just the start,” he added. “That was the beginning. Wait ’til you see the next one.”

Whatever the case, Colby Covington believes the card probably sold closer to 400,000 PPVs — and it was viewed by far more than that when you account for all of his fans in other countries.

“We probably got to three or 400, which no other cards had done that this year, and that was all me,” Covington said. “That’s all in America. We’re talking about global. We’re talking in Brazil. We’re talking in Europe, in England where they don’t have pay-per-views. They’re all streaming over there.

“If we’re talking Australia, I’m a huge draw in Australia, because of the incident…. Huge draw in Russia. People love me over there, because of Khabib, and they love the wrestlers. So I’m a big draw worldwide right now, and those numbers don’t adequately affect the type of attention, and hype that I’m generating…”

How many PPVs do you think Colby Covington’s title unifying showdown with Tyron Woodley will sell?