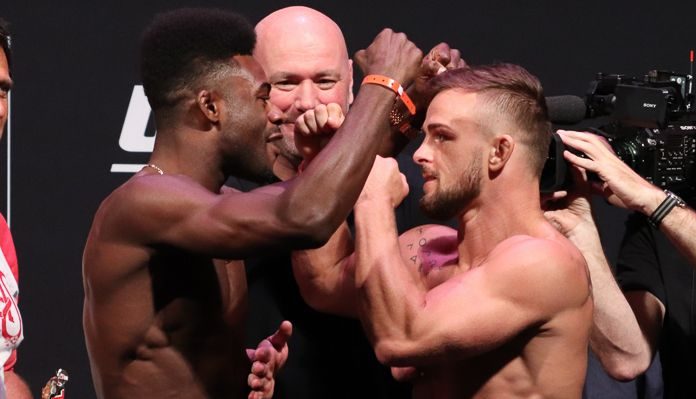 Cody Stamann was preparing to fight in March before the UFC even called him. Then, about a month he was offered the chance to fight at UFC 235, where he is set to take on Alejandro Perez.

Stamann, who is coming off of a submission loss to Aljamain Sterling in September is confident he was what it takes to beat Perez. Frankly, Stamann doesn’t even think Perez is that good.

“I mean I don’t think he has fought anyone with more than one dimension. He has fought some wrestlers and some strikers but he hasn’t fought anyone who can take him down and strike,” Stamann told BJPENN.com. “He hasn’t fought the upper-echelon of the MMA. Like he fought Eddie Wineland, and that is his best win as far as a guy of a name. If you watch Wineland fights from the past few years he is declining a little bit. He is not the Wineland of old so in my eyes he hasn’t beaten anyone worth mentioning. So a four-fight win streak that doesn’t mean a whole lot.”

Although Stamann is confident he will beat Perez, the hope was that he was going to fight Rob Font. Stamann believed that would have been a better fight for the fans and a more competitive matchup.

Yet Stamann is preparing for Perez and is ready to get a win to start to climb up the rankings again.

“I think it just puts me back in the mix. It just puts me back in the right direction,” Stamann explained, discussing where a win puts him in the division. “It doesn’t do anything to the rankings and honestly I couldn’t even give a shit about those rankings. I don’t care. I don’t care if you are ranked, I just want to fight the best guys in the world. It doesn’t matter. If they have a one-digit number, awesome, if not I just want to beat the best to be in pursuit of being the best in the world. A win gets over Perez doesn’t do much. I’m number 11, he is 12 but honestly he shouldn’t even have a number next to his name. We are going to go in there and settle it and hopefully move up to 10.”

One idea that is on Stamann’s mind is rematching Sterling. The 29-year-old feels he was winning the fight until he was submitted, and knows he could beat Sterling. He made one costly mistake and the fight was over from there.

“The Sterling loss, honestly in my head I believe if we ran it back I could beat him,” he said. “I made some poor mistakes that costed me my gas tank in that fight. Moving forward it is about being more disciplined and after that fight it really motivated me and made me hungry. I have been a different animal in the gym since that fight. You can be motivated and work hard but a loss, that does something. It put me to a new level and made me a lot hungrier.”

It is now fight week for Stamann, and the bantamweight is confident he will leave Las Vegas with a win. He is ecstatic he is fighting on a massive card like UFC 235, and hoping to kickstart 2019 in style.

“There are guys in the top-10 I can beat. In fact, in two years as I continue to get better I don’t think there will be anyone in that division who can beat me,” Stamann said. “I really want to get that Sterling fight back. That is one that is going to bug me for a long time. Really, I don’t know what the UFC has in store for me as there are a lot of young hungry fighters ready to fight guys with a number. Whatever the UFC wants I will fight whoever. I’m stacking bodies in 2019, and stacking a bunch of money and looking for a title in 2020.”