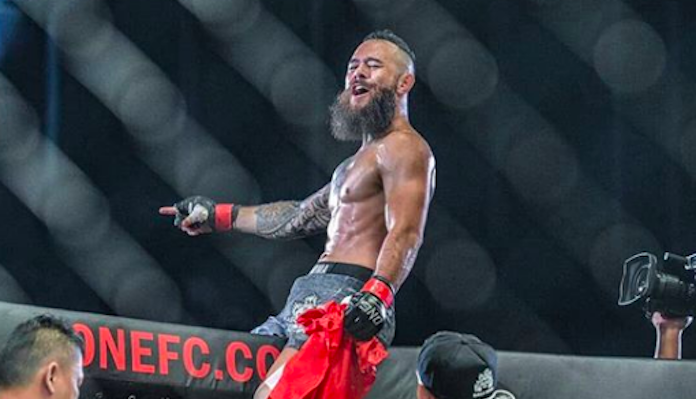 Anthony Engelen wrapped up the year 2018 in incredible style, picking up a pair of first-round victories in the span of two weeks in November. Unfortunately, this incredible success didn’t carry into the first phases of 2019, as he lost his first bout of the year, succumbing to a storm of strikes from Won Il Kwon in Jakarta in January.

With some time between himself and this tough setback, Engelen admits that he wasn’t as focused as he should have been heading into the matchup.

“Last fight I just wasn’t focused,” he told BJPenn.com in Tokyo. “I was coming off two straight wins, first round knockout, first round submission. I guess it was a little bit of arrogance as well. You know, I underestimated my opponent. That was definitely a big part of it. I wasn’t really able to do any research about him because there was not a lot known about this kid. The weight of all that on my shoulders and having to perform in Jakarta kind of just messed up my whole focus.”

The good news for Anthony Engelen is that he’ll soon have the opportunity to bounce back from this defeat. He’s scheduled to battle grappling savant Garry Tonon on the undercard of the stacked ONE: A New Era card in Tokyo, Japan this Sunday.

To say he’s excited for this fight with the massively hyped grappler would be an understatement.

“I’m super stoked,” he said. “You know, ONE Championship offered me to fight because they wanted an exciting fighter and an exciting show on their biggest event ever.

“I’ve lost a few fights, won more fights, but no matter what, I always bring a great fight,” he added. “I never intend to go to full three rounds. It’s make or break. That’s appreciated by the fans and the staff as well.”

When people talk about Anthony Engelen, they often talk about his highlight reel knockout victories. Yet the Indonesian-Dutchman actually began his martial arts journey as a grappler, and trusts in his jiu jitsu should Garry Tonon drag this contest to the canvas.

“In ONE Championship, I’ve had three submissions,” he said. “A lot of times I do like to take the fight to the ground because that’s actually where I’m very comfortable.

“Like you said, I started with jiu jitsu in my martial arts career,” he continued. “Garry Tonon, his jiu jitsu is of another level, no doubt about it. No one thinks otherwise. But like I said, I’m pretty comfortable on the floor anyways.”

While Tonon is best known for his world class grappling, he’s actually shown some decent striking his his first few ONE Championship bouts. In fact, the BJJ player has often begun his fights by striking for a period, perhaps in an attempt to gain experience on the feet. Engelen isn’t sure if Tonon will take this approach this time around.

“Looking at his past fights, I see that, that he doesn’t straightaway go for take downs,” he said. “That’s a good question; whether or not he’s going to do it this time as well. I mean, the guy wants to be an MMA fighter, and all fights start standing up, so if he wants to prove himself, he’ll have to bring it striking first. The question is how long will it take for him to go to the floor after he gets punched. That’s the question.”

Despite the fact that Tonon has only been striking for a few years, Anthony Engelen feels that the BJJ specialist’s striking is actually quite solid — if a little unorthodox.

“I’ve said this before as well, for someone who came into ONE Championship — any professional organization — with an 0-0 record in MMA, I think his striking is actually pretty decent actually,” Engelen said. “That being said, it is a little bit unorthodox. He, he likes to throw moves that don’t really make a lot of sense. I think sometimes he just tries to show off. Maybe it’s not even trying to show off, maybe it’s just trying to find his own style. Because what a lot of beginning fighters in general do is they look at people they admire and they try to kind of take a little bit of here, take a little bit of there, and try to make it their own. And I think that’s what he’s trying to do [with his striking].”

No matter how the action unfolds in Tokyo, Engelen is confident he will leave the cage in triumph and simultaneously slow the rise of his foe.

“It’s going to start standing, and I’m going to try punch him in the face,” he said. “He’s going to try to take me down. Let’s see if I can stop that, punch him a few more times, get it done in the first round then sit back in the crowd and enjoy the rest of the fights.”

If Anthony Engelen is able to topple Garry Tonon in Tokyo, he believes it will go down as the crowning achievement of his impressive career thus far.

“If I beat Garry Tonon, without a doubt it’ll be my biggest achievement.”