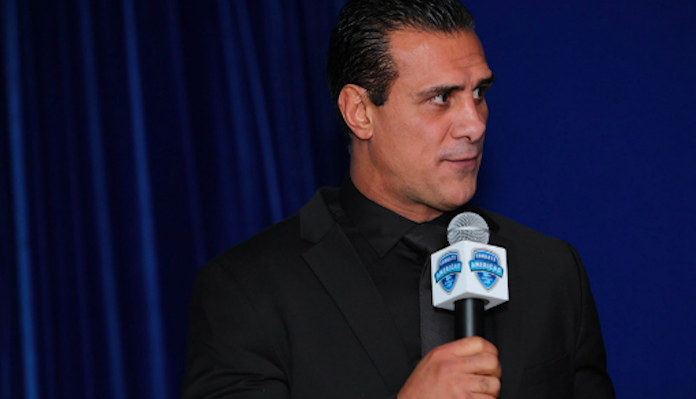 Combate Americas is one of the fastest-growing MMA promotions in the world. In fact, according to WWE legend and Combate Americas announcer Alberto Del Rio, the Hispanic MMA powerhouse now regularly rivals the UFC in terms of Spanish language viewership.

“Our numbers are fantastic,” Alberto Del Rio said of Combate Americas on episode 107 of BJPENN.COM Radio. “Like in numbers, we are just right behind the UFC. We are the most seen MMA company in Spanish around the world and I know that the language we speak here in America is English, but we do better numbers when it comes to the broadcasting in Spanish than the big companies or the biggest company you see. We do the same in Spain and we’re crushing any other company in Mexico.

“This is something that I always like to share… when I started working in this position with Combate Americas, I was just throwing something out there for the media and I said, ‘oh, we will have better numbers than UFC here in Mexico, in my country in less than a year.’ And you know, I mean I’m really happy to say this because we ended up really doing that after six months. Our numbers are fantastic and it’s just because we have our amazing group of people behind the scenes working for this company and we have amazing fighters giving absolutely everything inside the cage for us.”

On Friday, December 7, Combate Americas will look to hit another viewership home run with its second annual Copa Combate tournament — its biggest event of the year.

This epic, one-night tournament will see eight featherweights from eight different Latin American countries battle for a $100,000 prize and the biggest trophy in sports.

Alberto Del Rio could not be more excited for this epic event, which will stream on DAZN.

“We have the biggest event of the year for us here in Combate Americas, the Copa Combate,” he said of the event. “It’s something amazing. Last [year’s event] was fantastic, my friend. It was the first Copa, it was in Cancun, Mexico and this year, we have the second edition here in Fresno, California. Eight fighters, eight nationalities competing for $100,000 and the privilege of being called the Copa Combate champion. But this time, for this one, for this edition, we added something… The winner is going to take home the biggest trophy in sports, period. It’s a six-foot-tall, gold trophy, a beautiful trophy that the winner is going to be taking home. Six feet tall, man.”

In just 7️⃣ Days, 1️⃣ @combateamericas fighter will walk away with $100K💰 & this #CopaCombate🏆 (beautiful women not included). Watch Live on DAZN! pic.twitter.com/fwPfnWJdl0

“I want to see how the winner is going lift that big trophy over his head if he wins it after three fights,” Del Rio joked. “That’s going to be another challenge for the champion, not just those three fights that he has to fight in order to become the champion but also, to take that trophy home.”

While tournaments occur fairly regularly in MMA, one-night tournaments, wherein the victor must fight and win multiple times in a single evening to be crowned champion, have become a real rarity. Alberto Del Rio is proud to be a part of a promotion that helping bring this format back into the limelight.

“Just like in the old days of the UFC, and like they used to do it in Japan,” he said of this one-night tournament format. “I know a lot of companies are doing it these days, but this is going to be our second edition.”

Needless to say, Alberto Del Rio believes that Combate America’s Copa Combate event is one that all combat sports fans should be tuning in for.

“We have great fighters fighting [tonight],” he said. “Last year was phenomenal, this year, we have better fighters, the company has a better structure. We’re more experienced and I’m pretty sure it’s going to be phenomenal.”