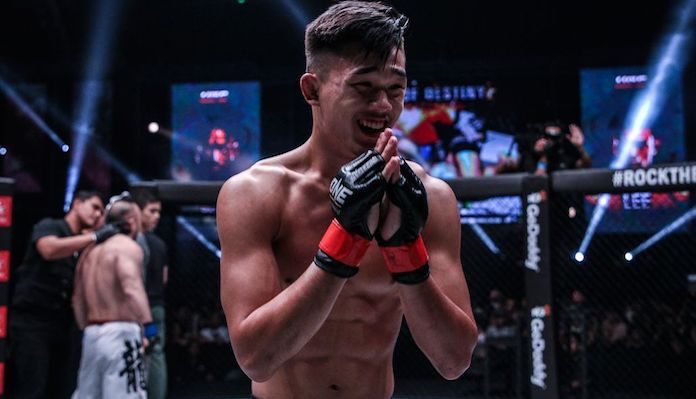 Christian Lee, the younger brother of ONE Atomweight World Champion Angela Lee, has spent the recent years of his career establishing himself as one of the top fighters in the ONE featherweight division. So, when he found himself on the receiving end of a respectful callout from ONE Lightweight World Champion Shinya Aoki, he was a little surprised.

“Initially, it came as a shock,” Lee told BJPenn.com. “I wasn’t expecting it — I’m sure no one was expecting it.

While Lee didn’t expect to be invited to fight Shinya Aoki for the ONE lightweight title, there was no hesitation to accept the fight. The 20-year-old responded with a firm yes, and is now booked to challenge Aoki for the lightweight belt in the main event of ONE: Enter the Dragon on May 17 in Singapore.

He considers this the biggest challenge of his career thus far.

“I’m very excited,” he said. “This is the biggest fight of my career to date and so far I’m having an excellent training camp, no injuries, nothing. Everything is going smooth, and I’m excited to step in there and show the world what I’m capable of.”

Christian Lee and Shinya Aoki hail from different corners of the globe, and different eras of the sport. Despite their starkly differing paths, however, they’re actually quite familiar with one another, having gotten some training in at Evolve MMA in Singapore in the past.

The first time Lee found himself on the mats with the Japanese legend, he was only 17 years old, and wound up on the receiving end of some pretty lopsided sparring sessions. Yet as he progressed, he says that he and Aoki became quite evenly matched.

“I had just turned 17, me and Angela both joined the Evolve fight team, and that’s when Shinya was based full time in Singapore,” Lee recounted. “We rolled a lot. Shinya said in his interviews — he was very honest about it — when I came there at 17 years old, I was a scrappy kid, but I would lose to him in the gym.

“But then I went back home, sharpened my skills, and going on 18 [years old], that’s when we sparred again, and it didn’t happen the same way. It didn’t play out the same. By the time I was 18, we were both very even with each other in terms of our skillsets in the gym.”

Eventually, Shinya Aoki and Christian Lee parted ways, and no longer called each other training partners. In the time since their last spar, they’ve both changed quite a bit — which is what makes their looming matchup so interesting.

“Flash forward two, three years later, we haven’t trained since then,” he said. “We haven’t sparred together, we haven’t rolled together, we’ve just been watching each other’s careers grow and evolve. I think that’s part of what makes him so interested in this matchup. We felt each other years ago, but now, flash forward, we get to see who has evolved their game better and faster in that time period.”

Lee has spent countless hours honing his ground game in the years since his last training session with Aoki, but understands that any time he spends on the canvas with the Japanese champion will be incredibly dangerous.

“Everybody does know that Shinya is a master on the ground,” Lee said. “He’s one of the best ground specialists in the sport of mixed martial arts. Hands down. However, I’m very confident in my skills.

“I know that whether we stand and bang on the feet or we go to the ground, I’ll be able to hang with him anywhere and get the better of him.”

If Christian Lee is able to wrest the title from the waist of Shinya Aoki, he intends to defend that title against the ferocious contenders of the lightweight division. That being said, a lightweight title win will not taper his ambition to capture gold in his native featherweight division in the future.

“Absolutely,” he said. “My eyes are set on nothing but the world title. From there, naturally, I plan to defend it and we’ll see where it goes from there.

“I feel I definitely have unfinished business in the featherweight division, but as much as I’d like to talk about that, my eyes are set on Shinya Aoki and I can’t think about anything else until then.”

As Christian Lee states so plainly, his focus is glued to the task of capturing the ONE lightweight title in Singapore. Achieving this mission in Singapore — a place he’s called home for much of his life — would be one of the greatest achievements of his career.

“It would be amazing to be win the Lightweight World Title in Singapore, in front of my family and friends, where my family’s roots are. I have a lot of support and love from Singaporean fans, and it would be a dream come true.”

Catch this compelling lightweight title showdown between Christian Lee and Shinya Aoki at ONE: Enter the Dragon on May 17.