Surging UFC welterweight contender Alan Jouban will face the toughest opponent of his young career when he takes on Gunnar Nelson in the co-main event of UFC London on March 18.

Jouban recently sat down with BJPENN.com’s Chris Taylor where he discussed a number of different topics including the UFC 209 welterweight title fight rematch between Stephen Thompson and Tyron Woodley.

“Man this fight (Woodley vs. Thompson 2) I saw it a couple of different ways. First off I had just switched the thinking process up in my head to this is the new scoring system. So I can no longer judge fights by the fact that this guy is pushing the pace or that this guy is the one walking forward. So I was using the new scoring system, where damage accounts for everything. But then, Las Vegas of all people decide that they are going to use the ‘old’ scoring system for UFC 209. Which screwed me up. So what I am getting at is watching the fight, the old scoring system, which is what they used that night. Using that system I could have given Stephen (Thompson) the fight. The second-round was the only round that was up in the air for me. But with that said Stephen did press the action more and threw a higher number of strikes. They may not have all landed but he definitely pressed the action and threw more. So I probably could have given Stephen three rounds to two.” 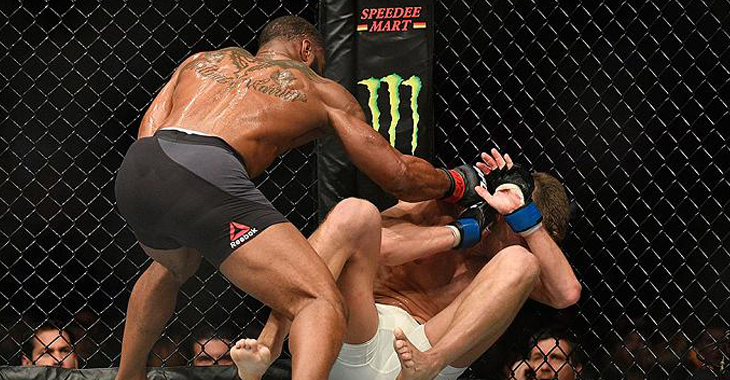 “But to be honest, when the fifth-round came along and the fight was kind of still up in the air. Nobody had really been hurt or done anything completely dominant. The fight was really close at that point. So to see Stephen get dropped twice in the fifth-round and have all that damage on his face I was like ‘How could you really give Stephen the win now?’. It just wouldn’t have made sense. It was the last round of the fight and I know you score it round by round. But he just got dropped twice and has these marks on his face looking all beat up and Tyron doesn’t have a scratch on him. It was just hard to score it in Stephen’s favor. Even the shots he landed, nothing really affected Tyron. It was more body kicks and this and that. So for me I was just like they have to give this to Tyron. Plus to be honest, I would not have wanted to see a third fight between them man. Like if they had given it to Thompson then there would have had to have been a trilogy right? Like hell no man! I wouldn’t be buying that shit. So even though I could have given the fight to Stephen based on the old scoring system, I was happy to see the belt just go back to Tyron so we could move on.”

How did you score the Woodley vs. Thompson rematch? Sound off PENN Nation!