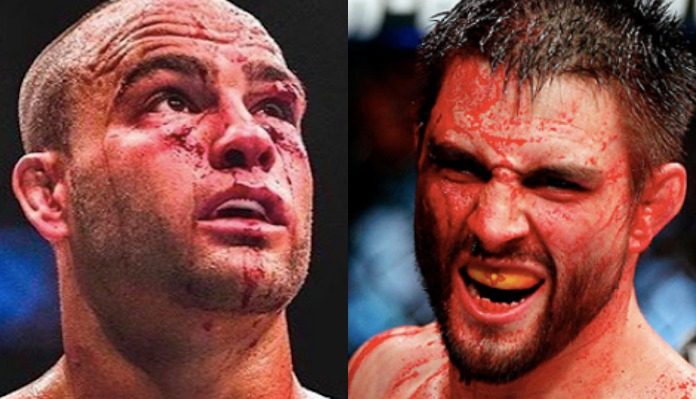 There are a few special fighters who will go down in MMA history based on their propensity for extreme violence in the cage. Former UFC welterweight champ Robbie Lawler is one. Former World Series of Fight lightweight champ Justin Gaethje is another. Then there’s the so-called “most violent man in MMA” Eddie Alvarez. And of course, there’s former interim welterweight champ Carlos Condit, who came up short against Alex “Cowboy” Oliveira in the co-main event of the UFC’s Saturday night stop in Glendale, Arizona….

Shortly after his loss to Cowboy, which came by way of second-round submission, the ever-violent Condit issued a weighty post-fight statement on Instagram, meditating on the defeat itself, and on his future in the sport.

“Post choke out, where the fuck am I , WTF happened, feeling kinda warm and fuzzy , hope I didn’t just piss my shorts on live TV , thousand yard stare,” Condit said in his statement. “I’ve posted plenty of pictures looking like a badass. Triumphant and powerful… but here’s the flip side, crumpled and weak in defeat. Rough day at the office.

“Fuck it though, I had fun. I trained my ass off and I came to fight. This is what leaving it all out there looked like on Saturday. Much respect to my opponent and his team. Thank you for taking the fight on short notice. Congratulations and best of luck in the future.

“I don’t know what’s next guys… I still love this game, and most days I still feel that fire, I absolutely love what it do, but maybe my time has passed. I don’t know the answer. this is what I know, this is my passion. I will never stop training, and If that leads me back to the the Octagon, you know I’ll try to make it bloody for ya.”

Shortly after Carlos Condit issued this poignant statement, another harbinger of carnage, Eddie Alvarez, took to Twitter to send him a message of respect.

Absolute respect @CarlosCondit , legend that always brings it . Your explanation and graciousness in defeat is Next level understanding, thank you .

“Absolute respect [Carlos Condit],” Alvarez said in his Tweet. “Legend that always brings it. Your explanation and graciousness in defeat is next-level understanding, thank you.”

What do you think the future holds for Eddie Alvarez and Carlos Condit?