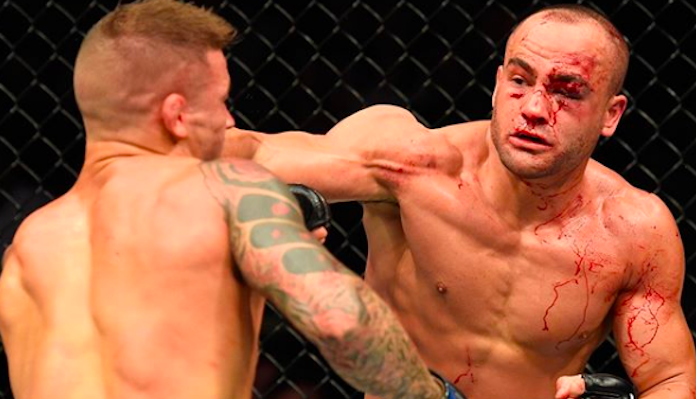 Eddie Alvarez’s UFC on Fox 30 rematch with Dustin Poirier did not go the way he planned. Instead, the all-action lightweight star was swarmed and TKO’d in the second round.

That said, Alvarez was not without his moments in the fight. In fact, it could even be argued that Alvarez was soundly in control of the fight until he landed an illegal 12-6 elbow from full mount, which prompted referee Marc Goddard to stand the fight. It was shortly after this standup that Alvarez was defeated, after all.

Shortly after this fight, fans started to speculate as to what might have happened if Alvarez had just been given a warning and allowed to continue to work from mount. Amid this speculation, one fan pointed out that, just before Alvarez threw his illegal 12-6 elbow, he seemed to have been advised to do so by his coach Mark Henry.

See this coaching sequence below.

Speaking on Ariel Helwani’s MMA Show on Monday, Henry owned up to this mistake, explaining that he wanted to advise Alvarez to throw a legal elbow from mount, but inadvertently did so in a 12-6 motion.

“He definitely did what he saw me do,” Henry said (transcribed by MMA Junkie). “Definitely my fault. I definitely wasn’t meaning to be cheap at all. I’m not stupid. I’ve been doing this a long time. I know he can’t do a top elbow. Out of the hundreds and hundreds of fights that I’ve done, every single time they say you can’t do that elbow. It was my fault, I feel horrible.”

While it’s commendable of Mark Henry to take responsibility for Eddie Alvarez’s illegal elbow, it’s pertinent that referee Marc Goddard assured the elbow wasn’t the only problem. He says that Alvarez’s elbow, along with an illegal “wet willy” and fence-grab, all combined, were the reason he forced the fighters to the standing position.

Goddard addressed the controversial standup after being put on blast by UFC welterweight contender Kamaru Usman.

Mr Usman, I understand that emotion is a factor. Mr Alvarez held the fence, clawed the ear & then threw the 12-6 elbow that is why the positional advantage was taken away. As for your request, no problem that’s easily arranged. I wish you all the best in your career. Thank you. https://t.co/x3GoCEkLqi