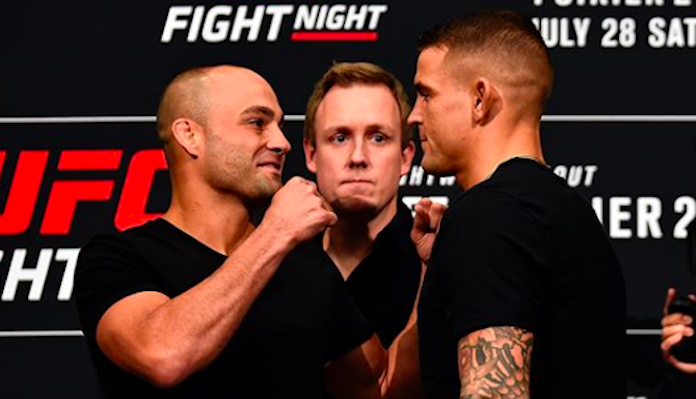 On Sunday night, in the main event of UFC on Fox 30 in Calgary, Alberta, Canada, Dustin Poirier and Eddie Alvarez finally stepped into the cage for a do-over of their controversial 2017 no contest. In the end, Poirier would win this rematch with a violent second-round volley. Unfortunately, this rematch produced a whole new dose of controversy.

In the second round, Alvarez had full mount on Poirier, who was wedged against the cage, unable to move. Alvarez then landed an illegal 12-6 elbow — one of the most frequently debated fouls in MMA — on Poirier’s shoulder, which prompted referee Marc Goddard to step in and issue Alvarez a warning. Instead of letting the action continue on the mat, however, Goddard then reset Poirier and Alvarez in the standing position in the center of the Octagon. No longer trapped, Poirier then poured on the offense, and got the TKO win.

The controversy is easy to understand. If Alvarez had been allowed to continue working in the same position after being warned about the 12-6 elbow, he might have won. According to Goddard, however, it’s not that simple.

Goddard defended his decision to stand the two fighters up on Twitter after UFC welterweight contender Kamaru Usman went off on him in a heated outburst.

“Fuck that referee,” Usman said in a Tweet that has since been deleted. “I will not fight if that ref is calling my fight. He cost Eddie that fight smfh.”

Mr Usman, I understand that emotion is a factor. Mr Alvarez held the fence, clawed the ear & then threw the 12-6 elbow that is why the positional advantage was taken away. As for your request, no problem that’s easily arranged. I wish you all the best in your career. Thank you. https://t.co/x3GoCEkLqi

“Mr Usman, I understand that emotion is a factor,” Goddard said in his response, explaining that the 12-6 elbow was not Alvarez’s only foul. “Mr Alvarez held the fence, clawed the ear & then threw the 12-6 elbow. That is why the positional advantage was taken away. As for your request, no problem that’s easily arranged. I wish you all the best in your career. Thank you.”

What did you think of Marc Goddard’s decision to stand Eddie Alvarez and Dustin Poirier up?