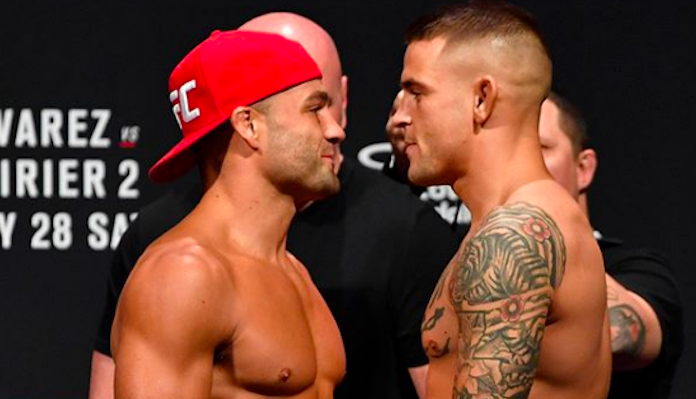 In May of 2017, Dustin Poirier and Eddie Alvarez met in a thrilling fight that unfortunately ended in controversy, as Alvarez landed an illegal knee and the bout was ruled a no contest. 14 months later, in the main event of last Saturday’s UFC on Fox 30 card, the pair met again. This time around, Poirier won by second-round TKO. Regrettably, the bout once again produced a significant dosage of controversy.

In the second round, Alvarez had Poirier in mount against the cage, where, in the span of a minute or so, he grabbed the fence, stuck his fingers in his foe’s ear, and landed an illegal 12-6 elbow to his shoulder — all illegal maneuvers.

These fouls prompted referee Marc Goddard to halt the action and stand the fighters up. It was then that that Poirier cranked up the offense, rocked his foe, and swarmed for the TKO win.

Speaking at the UFC on Fox 30 post-fight press conference, Poirier addressed Alvarez’s fouls, and gave his take on whether or not they were intentional.

“The weird thing is, when I had him in the guillotine, he stuck his finger in my ear and was pulling me down and the ref warned him,” Poirier said (transcript via MMAFighting.com). ”And he put his finger right back in my ear. So, this is an old dog that knows a lot of tricks.”

”I don’t want to say somebody’s a dirty fighter,” Poirier added. “But the first fight, you kneed me; the second fight, you tried to elbow me illegally and you gave me a wet willy. We’ve got to draw the line somewhere.”

“People are always going to point to something,” Poirier said. “These checks are going to cash. And I have another win on my record, and another step closer to fighting for the world title. So they can point and say what they want. I’m laughing all the way to the bank and all the way back home to my family with another win that’s been earned. Nothing’s been given and that’s that.”

Where do you stand on the controversies produced by Dustin Poirier and Eddie Alvarez’s UFC on Fox 30 rematch?