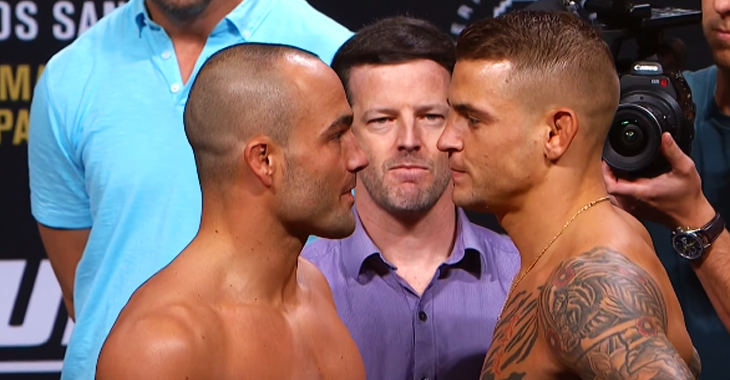 Eddie Alvarez is now at the top of the lightweight rankings and knocking on the door for another title shot after a Fight of the Night performance against Justin Gaethje. However, there is more than just the winner of Khabib Nurmagomedov and Edson Barboza who stands between Alvarez and either interim or undisputed gold. Lurking in the shadows and pacing for another crack at Alvarez is Dustin Poirier. At UFC 211, Poirier believes he was track for a big victory of his own until an illegal knee by Alvarez ended their fight. It’s something Poirier isn’t going to let go, especially now that the ‘Most Violent’ nickname is on the line.

“I don’t like [Eddie Alvarez] personally. I used to be a big fan of him, I still respect his fighting style. He’s a dog, he’s a warrior, he’s down but never out in fights. I believe that truly. But I used to really respect the guy and look up to him. Now he’s a piece of sh-t. The way he’s lied to himself and lied to people and said stuff about me and about the fight. So, I don’t have any respect for the guy. Eddie went in there with a good game plan [in the fight with Justin Gaethje], used good body work and like I said real good in and out movement. Gaethje stands real flat-footed and if move in and out on a guy like that, you can really finesse him.”

I’m gonna get ya pic.twitter.com/guAi43GD5P

“[Alvarez is] the highest ranked guy that’s open right now and it makes sense. We have unfinished business and we have to do it. I’m going to go out there and out-class him on the feet and give him another boxing lesson. I’m going to stop his shots and I’m going to beat him up. I’m going to pry [the UFC’s ‘Most Violent’ title] from his hands. It’s writing itself. I called it after I beat [Anthony] Pettis. I’m going to fight the winner [of Alvarez vs. Gaethje], now it’s gonna’ be me and Eddie, winner gets a title shot.” — Dustin Poirier speaking to FloCombat.

The fight makes sense, especially after the recent news regarding Tony Ferguson being out for awhile. The other contenders are booked and Justin Gaethje will need to heal up after that grueling war from UFC 218. Eddie Alvarez wants a ‘mega fight’ next, but this legit rivalry between these two fighters and the lightweight purgatory that is brewing could be enough to re-book that fight. Of course, the fans wouldn’t mind seeing the rightful winner decided once and for all.