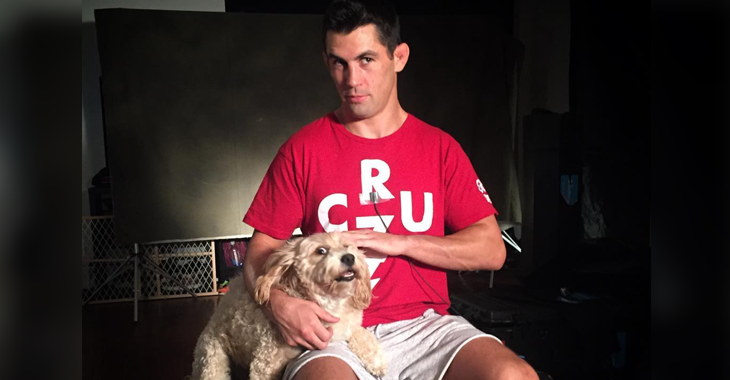 Dominick Cruz is scheduled to defend his UFC bantamweight title against Cody Garbrandt this weekend in the co-main event of UFC 207, taking place in Las Vegas, Nevada.

Going into the fight, both Cruz and Garbrandt have battled back and forth verbally and the banter even involved an exchange with Garbrandt’s girlfriend on social media.

“Don’t get involved in big boy stuff little girl – ur just going to get yourself embarrassed… Just have the tissue ready for your boy toy when he loses, that’s your job!”

Those were the words of advice from Cruz sent over to Garbrandt’s girlfriend on social media after he saw a post of hers that had him tagged in it.

“That whole thing that happened with his girlfriend, first of all, I’ll just squash that immediately,” Cruz said on The MMA Hour recently of the situation (transcribed by MMA Fighting). “I have no problem with his girlfriend or women in general. I love women, I respect women. I’m a mama’s boy, to be perfectly honest. By me going on there, I got tagged by her, apparently — I didn’t even really realize who she was at first until looked into it, and she tagged me in that thing. So all I said, was actually very nicely, I said, ‘don’t get involved in this stuff. Your job is to take care of your boy toy, plain and simple.’

“I don’t know how they are, how they do it, but I don’t want her involved in this stuff. And to me, it’s his job to tell her that stuff, to keep her out of it. But clearly, she probably wears the pants in the relationship because he’s a big softy, as much as he tries to pretend he’s a tough guy. She went out there and tried to defend him, but really, I just don’t want her involved in it. She shouldn’t be involved in it, because I don’t want her to get embarrassed by comments from people on the outside. You don’t get involved in this beef. This is between me and Cody only. This has nothing to do with her, and I was very kind and gentle about letting her know that.”

Garbrandt said on The MMA Hour last week that Cruz took it to a new level with sending messages to his girlfriend and that he “lost a lot of respect for” Cruz. Garbrandt stated that he feels the current champion is “very immature and he’s just desperate” and says he should be focusing on their fight rather than commenting on his girl’s social media.

Will emotions play a big factor in the fight between Dominick Cruz and Cody Garbrandt? Give us your thoughts in the comments on the situation and how you see the fight playing out!