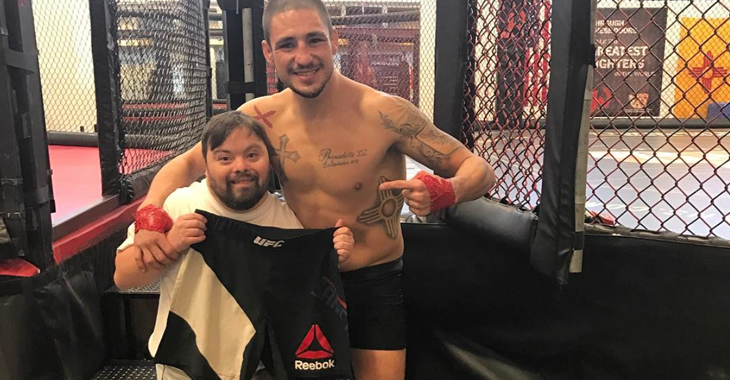 Jackson Wink MMA has a new fighter on their team and has already got some great one-on-one training done with UFC veteran Diego Sanchez.

@diegonightmaresanchezufc The Lionheart with a heart of gold. and the shermanator @isaacmarquezabq showing everyone how it's done. 👊🏻

Holm said in one of her videos, “One of my favorite things to see here at Jackson Wink MMA, I gotta tell you, the many things people don’t know about this place.

Holm added in her caption, “@diegonightmaresanchezufc The Lionheart with a heart of gold. and the shermanator @isaacmarquezabq showing everyone how it’s done. 👊🏻”

The guys at Jackson Wink MMA also had Marquez sign one of their team shirts filled with other fighter’s signatures that will go on their wall.

We have an awesome addition to our roster. The Shermanator has officially joined the team. Our future Champ. Follow his journey @isaacmarquezabq . #itrainhere #teamjacksonwink #mma #life #albuquerque #newmexico

Diego Sanchez holds a 27-10 professional MMA record and is known for his heart and exciting fights. With his last bout against Al Iaquinta at UFC Fight Night 108 not going his way after being knocked out for the first time in his career, some fans and pundits commented that it might be time for Sanchez to retire. Sanchez released a statement shortly after the loss on social media and said that retirement was still far away as he is as healthy ever and that losing is sometimes a part of the mixed martial arts game. “I choose to believe in my dream! I am confident, I am experienced, i am still very healthy, young for my physical age and more driven and hungry for success than ever,” Sanchez said in his statement. “So I choose to continue to roar like a lion for the lord Jesus and do what I do and that’s fight ON! To all my fans and friends that believe in me I love you guys!”

Who would you like to see Diego Sanchez be matched up with next in the Octagon? Let’s hear it in the comment section!