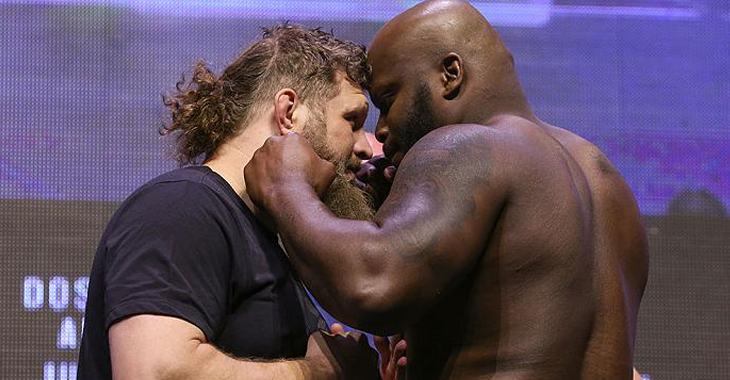 In the co-main event of UFC FN 90, Roy Nelson and Derrick Lewis squared off in a pivotal heavyweight matchup.

Both men come out aggressive and exchange punches before clinching up. Nelson gets the body lock and presses Lewis against the cage. Big John separates them and Lewis lands a head kick and a right hand that land clean. Nelson responds with a trip and secures the takedown, landing in Lewis’ half-guard. Lewis makes it to his feet and lands a major knee to the body followed by a knee to the head. Nelson looks for another takedown and eats another big shot. Nelson looking a bit wobbled as he pushes Lewis against the cage. Big John separates them as Lewis lands bombs on Nelson. Nelson eats them in true ‘Big Country’ fashion and secures a takedown.

The second round starts and Lewis looks to build on the momentum. They exchange leg kicks and look hesitant to exchange. Halfway through the round and Nelson clinches Lewis against the cage. Big Country secures the takedown and gets side control. Nelson lands some shots before Lewis manages to make it back to his feet. Nelson clinches against the cage and gets another takedown. Nelson passes to side control however Lewis gets back to his feet with ease and lands a right hand at the end of the round that glances off of Nelson.

Lewis’ corner expressing a sense of urgency between rounds. He comes out in the 3rd aggressive, landing a flying knee followed by a head kick that Nelson walks through. Nelson clinches against the cage and looks for a takedown. He gets the trip and lands in Lewis’ half guard with nearly half of the round over. The crowd boos as John McCarthy reminds the fighters to work. Lewis makes it to his feet and Nelson clinches him against the cage. Nelson lands a double leg as Lewis muscles his way back up to his feet. Nelson once again clinches him against the cage, and Big John McCarthy separates the pair. Lewis lands a big overhand followed by a liver kick. Nelson eats a combination and backs up against the cage as Lewis continues to land. Nelson slips a hook and clinches Lewis against the cage while looking for another trip. Lewis shrugs him off and lands several big uppercuts on Nelson. Lewis lands another major blow with just 10 seconds left, looking to land more as the round ends.