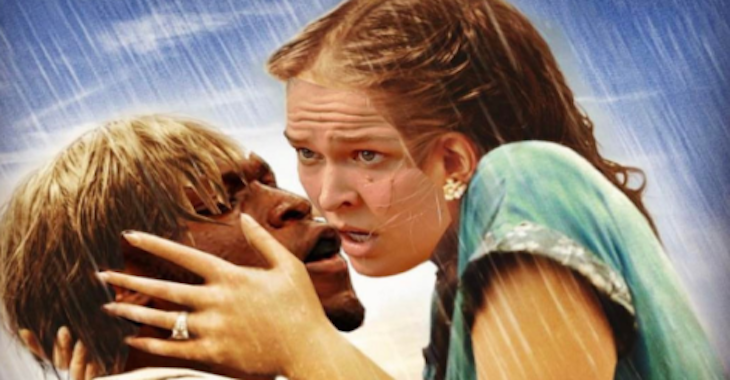 Last Sunday, in the main event of the UFC’s latest trip to Halifax, Derrick Lewis weathered an early bit of adversity to club Travis Browne into unconsciousness with a right hand and a series of ground strikes. In the wake of this thunderous win, Lewis criticized Browne for the allegations of domestic abuse that linger in his past, and made comments about Browne’s current girlfriend, UFC superstar Ronda Rousey.

“Where Ronda Rousey’s fine ass at?” he said.

Though trash talk between opponents typically tends to die down once a fight is over, Lewis has not let up with his jabs at Browne and his threats to steal Rousey away from him. In the days since his win, he has uploaded several photoshopped pictures to Instagram which depict everything from Rousey in chains, to him kissing Rousey a la Ryan Gosling and Rachael McAdams in The Notebook. See Lewis’ latest Rousey-centric social media posts below.

Lewis, of course, is married with three children. Given this, we can safely assume that his trolling of Rousey and Browne is in jest.

With his defeat of Browne, Lewis extended his win-streak to a whopping six, having defeated Viktor Pesta, Damian Grabowski, Gabriel Gonzaga, Roy Nelson, Shamil Abdurakhimov and now Browne in his most recent fights. The hulking Louisiana-born Texan now stands alongside Francis Ngannou as one of the few fresh contenders in the ever shallow heavyweight division.

In defeat, Browne fell onto a three-fight skid, as he has been TKO’d by Cain Velasquez, decisioned by Fabricio Werdum, and now defeated by Lewis in his most recent outings. Though he was once considered a legitimate heavyweight title contender, it’s now hard to say what his future holds.

What do you think of Derrick Lewis’ trolling of Travis Browne and Ronda Rousey? Sound off, PENN Nation!