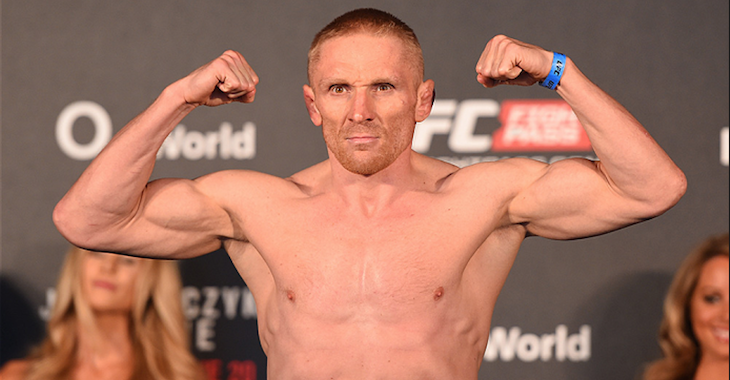 Dennis Siver will return to the octagon for the first time in over two years tonight in Oklahoma City where he will meet BJ Penn on the main card of UFC Fight Night 112.

The 38-year-old, Siver, was last seen in action in June of 2015 in Germany where he suffered a unanimous decision loss Tatsuya Kawajiri at UFC Fight Night Berlin.

Prior to that, Siver suffered a TKO loss at the hands of Conor McGregor in the main event of UFC Fight Night 59 in Boston.

Dennis Siver’s most recent victory came over Charles Rosa via unanimous decision at UFC Fight Night 53 in October of 2014.

Siver, who has always been known for his muscular physique appears to have lost some mass heading in to tonight’s fight with former two division UFC champion BJ Penn.

Look at his face. Even Dennis Siver can't believe what USADA has done to his body. #UFCOKC pic.twitter.com/0vTe8Y4CI4

Siver’s opponent, our namesake BJ Penn, also finds himself in desperate need of a win.

“The Prodigy” has lost his last four fights in a row, his most recent defeat coming at the hands and feet of Yair Rodriguez this past January in Phoenix.

Penn’s most recent win came all the way back in November of 2010 when he knocked out Matt Hughes in just 24 seconds at UFC 123 in Detroit.

Following his rubber match with Hughes, BJ Penn squared off with Jon Fitch in a battle of top welterweight contenders. Unfortunately for both fighters, the bout was ruled a draw and neither man would be awarded a shot at the title.

Who do you think will emerge victorious when BJ Penn and Dennis Siver throw down tonight in Oklahoma City? Sound off PENN Nation!