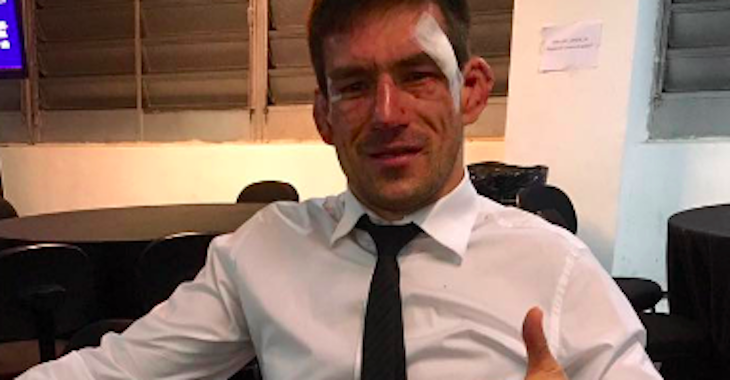 Last night, the UFC returned to Brazil with an action-packed stop in the city of Sao Paulo. In the co-main event, one of the country’s top fighters, Demian Maia, returned against surging contender Colby Covington. Despite a spirited effort, Maia ultimately came up short in this fight, giving up a unanimous decision after three bloody rounds.

Shortly after his loss to Covington, Maia took to Facebook to issue a brief statement. As always, the Brazilian jiu jitsu savant was nothing but class in defeat – even in spite of Covington’s controversial, anti-Brazil post-fight remarks.

“I want to thank everyone for their support and cheers in one more step on this path,” Maia said in his post, which was penned in his native Portuguese. “The great lesson of the sport is to know that competing always brings lessons, and we have to be thankful for victory and defeat for learning. I did my best, I made a few mistakes and I got a little moved, which may have hampered the execution of my strategy, but that does not detract from my opponent, who deserved the victory, and I leave my head held high knowing that I fulfilled my role as best I can, and I move on to the next step of the journey. Thank you all!”

With this loss to Covington, Demian Maia falls onto a two-fight skid, having also come up short in his last fight, a decision loss to UFC welterweight champion Tyron Woodley. These losses were preceded by a seven-fight streak, highlighted by impressive wins over Jorge Masvidal, Carlos Condit, Matt Brown, Gunnar Nelson, and Neil Magny. Maia, who is now 39 years old, is 25-8 overall.

What do you think of this classy statement from the veteran Demian Maia? Who do you want to see the BJJ whiz fight next?