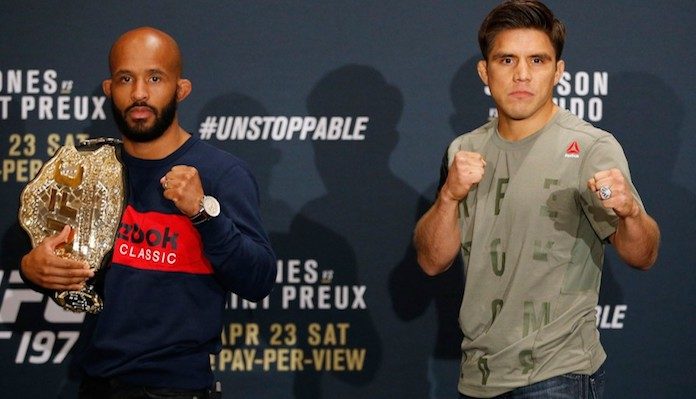 For a time, it looked as though dominant UFC flyweight champion Demetrious Johnson and dangerous bantamweight champion TJ Dillashaw would collide in a flyweight title super fight this summer. When the negotiations for this fight fizzled out, however, the two champions reset their crosshairs on challenges in their respective divisions. For TJ Dillashaw, that means a UFC 227 rematch with Cody Garbrandt, who he knocked out in November. For Demetrious Johnson, that’s likely to mean a rematch Henry Cejudo, who he knocked out in 2016 — though the date for this rematch has not yet been set.

On Wednesday afternoon, Cejudo took to Twitter in an effort to expedite negotiations for his second crack at the flyweight champ “Mighty Mouse.” He did so by criticizing the champ for his failure to draw significant audiences in previous outings, and promised to “kill the mouse.”

Needless to say, Cejudo seems keen on getting the flyweight champ’s attention. Whether this attempt will work remains to be seen, but at the time of this writing, Johnson has not responded.

In his next fight after his failed title bid opposite Demetrious Johnson, Henry Cejudo gave up a razor close decision to two-time flyweight title challenger Joseph Benavidez. In his next fight thereafter, he rebounded with second-round TKO of former title challenger Wilson Reis. In his most recent bout, Cejudo authored a dominant decision defeat of rising contender Sergio Pettis. At present, he is 12-2 overall.

Demetrious Johnson, meanwhile, is 27-2-1 overall. He’s defended the flyweight title three times since besting Cejudo, defeating Tim Elliot by decision, Wilson Reis by submission, and most recently, Ray Borg with the 2017 Submission of the Year frontrunner. He holds the record for most consecutive title defense by a UFC champion.

Does a Demetrious Johnson vs. Henry Cejudo rematch interest you?