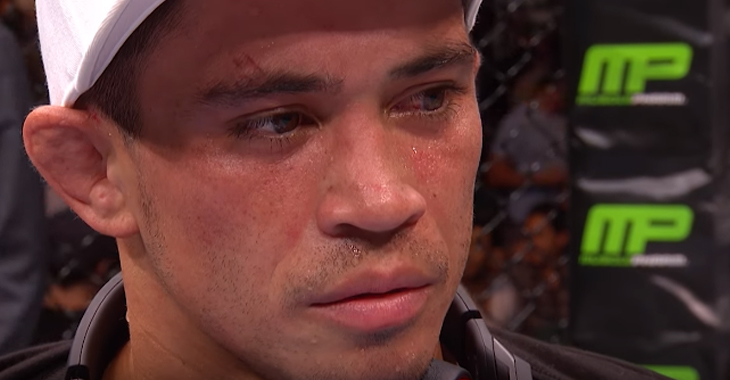 This Saturday, Demetrious Johnson will (finally) step into the Octagon with Ray Borg to attempt a record-breaking victory. If he can get past Borg, he’ll have beaten Anderson Silva’s tally mark of consecutive title defenses, forever cementing him into UFC history. An aura surrounded Silva due to the way he fought and the things he was able to accomplish. It’s the tingles and upset stomach you get when you reach the final boss of a video game. …And you doubt. Then, you panic. Eventually, you are defeated. Demetrious Johnson may never be Anderson Silva to some people, but he’s developing his own energy. It was this energy that Chris Cariaso felt on the night of UFC 178 right before he hit the cage.

“I didn’t feel pressure until about five minutes before I walked out. I thought ‘oh my god, what did I get myself into.’ I remember walking out and hearing Joe Rogan say ‘Cariaso needs to fight the fight of his life!’ and I was like ,’Oh my god, what am I going to do?’ It was during the pre-fight when they were talking about it. They had it on in the back room and it was playing. And I was like ‘oh sh-t, here we go.’ I threw a kick and slipped. He came up on top. I remember him going for the Kimura earlier. I remember stuffing my hand and hiding it and then I saw an opening to escape again. That’s when he went right to it. He caught my arm and it was too late.” “He’s just so well-rounded. He’s able to fight from the outside, fight from the inside. His grappling was also on point as well. That was my main thing. Everywhere we went he kind of had an answer for. I’ve been dealing with that my whole career — being the smaller guy and getting people to appreciate it. Hopefully he goes out there and gets a big win, whether it’s a submission or a good domination. Hopefully that will put the flyweight division on notice. That’s what we’ve been hoping for since the flyweight division was started — to get noticed.” — Chris Cariaso speaking to ESPN.

Even six fights ago against Chris Cariaso, it was clear that the current (and only) UFC flyweight champion had already developed ‘The Glow’, as it was referred to in the cult-classic ‘The Last Dragon’. At this point, what more does Demetrious Johnson need to do to — not only put a bigger spotlight on the flyweight division — but become a unanimous legend in the sport? Is the onus even on him, or is part of it the audience’s fault or poor marketing? Either way, he certainly has manifested his own destiny. If there is a book on champions, then Johnson goes by it. He’s on a 12-fight win streak, never strayed from his division and he finishes opponents. Beating a record held by Anderson Silva would only add to an already ridiculously impressive list of accolades that sometimes are overlooked.