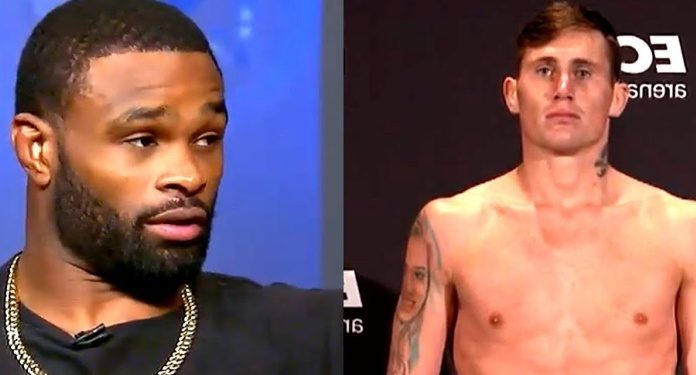 Just when we think that the welterweight division has a clear path to move forward on atop the title scene, a wrench potentially could have been thrown in the mix.

As is the whole point of interim titles, the titleholder is granted a title shot against the undisputed champion upon their return. Which is generally the reason that interim titles are supposed to be made for in the first place…for when champions are out for an extended period of time…

Therefore the next welterweight title bout we are expecting to see is Covington challenging Tyron Woodley who last defended his crown at UFC 214 against Demian Maia around this time last year.

However, it appears that rising divisional contender Darren Till might know something we don’t as he hinted early today that Covington is “out” and went on to tell the champion to accept a fight.

What fight? Ain’t nobody offer me shit. Thought Qweefington was getting smashed next. Y’all challenger need to coordinate y’all ass whipping better! https://t.co/iRAuRm84uf

Till: Accept the fight mate @TWooodley

Woodley: What fight? Ain’t nobody offer me shit. Thought Qweefington was getting smashed next. Y’all challenger need to coordinate y’all ass whipping better!

Woodley: Bahahahhahaha this is a shit show.

Till positioned himself right in title contention with the biggest win of his career over Stephen Thompson in the main event of UFC Liverpool in May.

While it’s all pure speculation at the moment, it certainly would be very interesting if what Till is saying is true.

Currently ranked No. 2 in the rankings behind Covington, he would be a logical next choice to fight for the title although he missed weight in his last outing.

Woodley is also looking to return soon and the UFC is in need of booking their upcoming pay-per-views following UFC 227.

Perhaps the most interesting thing in this possible situation of Covington being sidelined for whatever reason would be whether or not he would keep his interim title. One would have to assume he wouldn’t if we look at what happened to Tony Ferguson at lightweight which is probably the most similar situation to what this would be if the case.