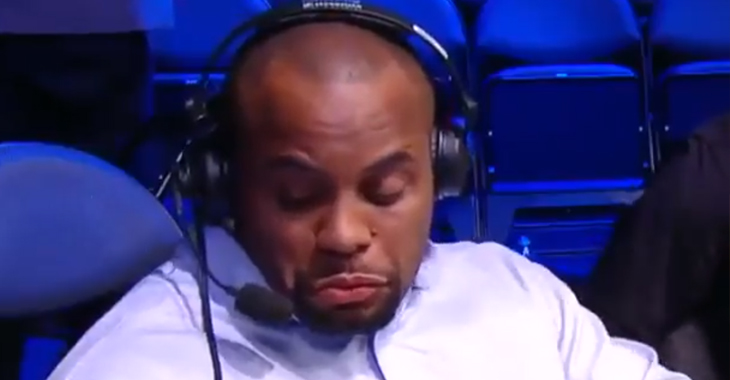 Saturday’s UFC 216 card turned out to be an embarrassment of riches. Lando Vannata and Bobby Green had a crazy, bloody Fight of the Night. Tony Ferguson became the number one lightweight in the world not named Conor McGregor, in an exciting title fight with Kevin Lee. Who can forget Demetrious Johnson inventing new and amazing ways to tap opponents out by blending a suplex and an armbar? However, the best fight on the card may have gone unnoticed. Thanks to this exclusive clip, UFC shows who the real fight of the night was: Daniel Cormier vs Audio Cords.

Joe Rogan and Jon Anik seem to carry on, completely unaware that Daniel Cormier is in the midst of an impromptu title defense. No matter what he threw at the cords, they just kept coming back. Luckily, Cormier is a champion and persevered through every round. Eventually, he knocked out the cords by shoulder strike late in the fifth. There you have it, whether it be in the Octagon or in the booth, you better come correct to Daniel Cormier. He embraces the grind. On the other hand, some bluetooth technology might be beneficial for everyone involved.