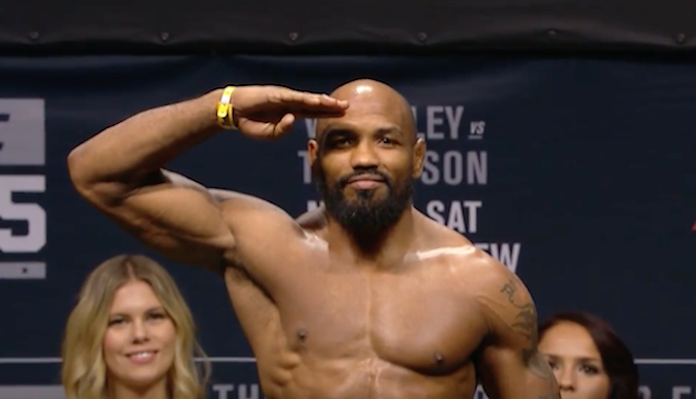 Last night, in the main event of UFC 225, Yoel Romero gave up a competitive — and somewhat controversial — split decision to reigning UFC middleweight champion Robert Whittaker. With this result, Romero falls to 0-2 against the current champ, which represents a tough situation for any contender. Romero’s situation looks even more uncertain when you consider the fact that he has now missed the 185-pound limit for middleweight title fights on two separate occasions.

Here’s what Cormier had to say:

Since @LukeRockhold can’t fight I know who @AlexTheMauler can fight. Win or lose I say get him in there with @YoelRomeroMMA let’s see this #1 contender fight.

“Since [Luke Rockhold] can’t fight I know who [Alexander Gustafsson] can fight,” Cormier said in a Saturday night Tweet. “Win or lose I say get him in there with [Yoel Romero] let’s see this #1 contender fight.”

While Yoel Romero remains the bona fide number-one contender in the middleweight division, his struggles with the scale would seem to indicate that it’s time for a move to light heavyweight. Interestingly, this is actually the weight class in which Romero’s mixed martial arts career began, as he fought in the division until he was knocked out by Rafael “Feijao” Cavalcante in 2011.

What do you think Yoel Romero’s next move should be? Do you like this suggestion from the UFC light heavyweight king Daniel Cormier? Join the conversation in the comments section below!