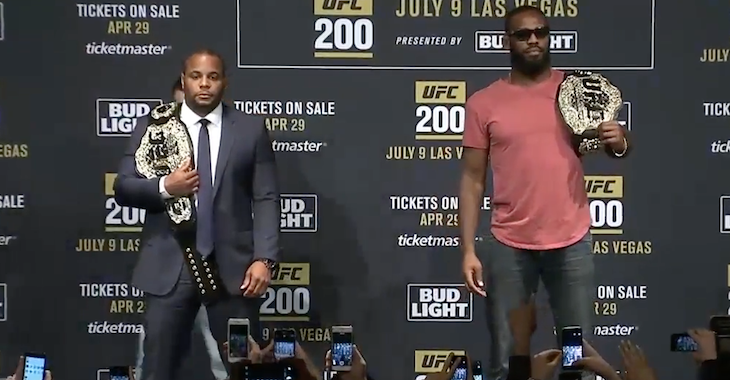 When UFC light heavyweight champion Daniel Cormier found out that Jon Jones was pulled from their fight at UFC 200, he was miserable, to say the least.

Cormier was looking to establish himself as one of the greats in his attempt to avenge his only loss to the oftentimes argued pound-for-pound king in Jones. However, just days ahead of their competition, Cormier had the opportunity snatched from him after Jones tested positive for banned substances and was pulled from their fight.

With their bitter rivalry that had them throwing blows in a press conference leading up to their first fight at UFC 182, you would think Cormier would be taking every opportunity possible to throw a verbal attack at Jones. However, “DC” has taken quite the opposite route.

“What’s it do for me? It doesn’t make me feel any better if I go out there and try to pile on him,” Cormier told FOX Sports. “What’s it do for him? Being that the guy he has been so tightly tied to is out there fighting while he doesn’t get to do what he’s known to do, that can really affect him going forward. You never know what happens to people in those types of situations. Because obviously, I’m pretty sure he’s going through some tough, tough times depressionwise and I would not want to say something that could end up turning into something way more negative.”

“I try to think about things on a bigger level than just competition. As a human being, that’s not who I am. I’m not one to kick somebody while they’re down. It’s not who I am.”

Even with Jones’ verbal attacks after beating him at UFC 182, Cormier says that he still doesn’t want to rub salt in the wound.

“In terms of me, I just wish him the best and just hope he can get back to doing what he does.”