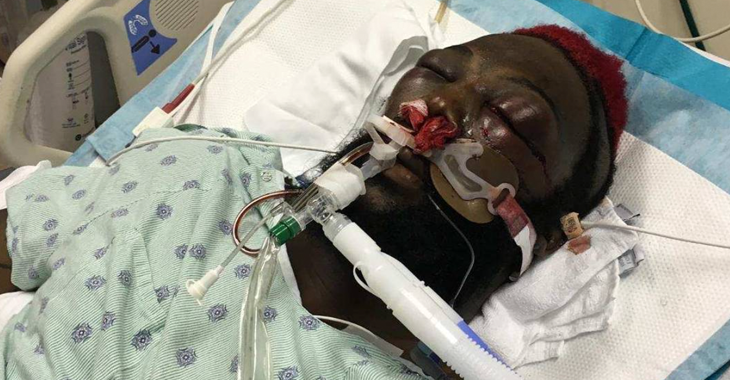 Dhafir Harris, better known as Dada 5000 was hospitalized in critical condition immediately after his fight with Kimbo Slice at Bellator 149.

Dada 5000 spent nearly two weeks in the hospital after the fight and says he was actually pronounced dead after suffering from cardiac arrest, dehydration, fatigue and renal failure.

Shockingly, Harris says that his condition wasn’t due to the weight cut or his diet like many reports suggested after his fight. Harris claimed in an interview with MMA Fighting that the medical conditions he suffered were “induced.” Dada 5000 implied that he suspects that he may have been set up with contaminated water before his match with Slice.

“If I was going to have kidney failure, if I was going to have a heart attack, I would have had it in practice,” said Dada 5000. “When I was doing 10-minute rounds in sparring and grappling, everybody would get a break except me. I was in shape. A lot of people may think I was not in shape. But no, being in shape had nothing to do with it. This sh*t was bigger than being in or out of shape. These guys were looking to take me out at all costs. The inflammation that I’m going to submit is documented. Don’t take my word for it. It’s documented. And when Kimbo Slice feels like sh*t or anybody that’s involved, they’re going to know Dada 5000 took this seriously. They try to say, ‘Hey, he took the fight too soon. He cut weight too fast.’ You know, man. I was cleared by all the medical doctors. Don’t try to throw that out there as scapegoat because I don’t need it. I was cleared and ready to fight. I felt great up until the time I started taking and drinking that water out of the back dressing room. I’m telling you guys this.”

MMA Fighting’s Marc Raimondi who interview Harris asked, “Who do you think it was? Kimbo’s people?”

“If it is, we’re going to find out,” said Dada 5000. “But the truth of the matter is that I felt horrible after I started drinking that water. This is bigger than me. There is a lot of money on the line; millions and millions of dollars were on the betting line. I don’t know who it could have been, but I know it was not natural…”