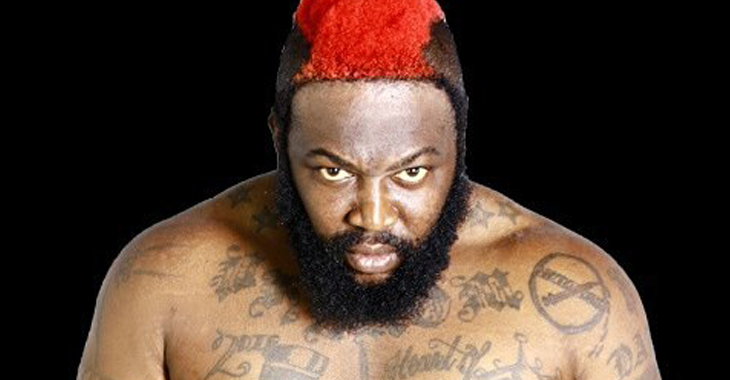 There was major concern for Dhafir “Dada 5000” Harris after his bout with Kimbo Slice at Bellator 149, which took place back on February 19th.

“Dada 5000” was rushed to the hospital immediately after the bout was over, suffering from cardiac arrest, dehydration, fatigue and renal failure.

“When I actually fell inside that ring, Kimbo Slice never touched me,” Harris said on The Dan LeBatard Show (transcribed by MMA Fighting). “I had a heart attack. So, when I slammed against the cage and I went down, that was just the beginning.

“The heart is a muscle, so when the kidneys shut down and I’m still pushing, the next thing to go was the heart. So when my heart stopped, it’s like, I was out of it. I didn’t remember nothing. When they brought me back, I was inside the hospital and they said that I had two heart attacks — and this is on paper we can provide to you guys. I had two heart attacks and I [flat-lined] twice. And for me, I was just thanking God, like, I’m here for a real reason. Because there’s individuals out there who didn’t go through a fraction of what I went through and they’re no longer breathing.”

Harris says that he didn’t know what was happening with his body and never realized the severity of his condition.

“I was thinking to myself, ‘what is actually going on with me?’ I didn’t know at that time, medically, that my kidneys had locked up on me and that I was having a heart attack. And the last thing that I remember is that I was leaning on him, and he shifted away from me. He swung, but he missed, and I stumbled and I went down. The next thing, I woke up hours later and I was inside the hospital.

Harris said his faith and the support of his family at his side is what saved him.

“I come from a spiritual background,” Harris said. “I’m laying on the gurney, the bed. Now, they say when a person is inside of a coma, be careful of what you say because they can hear you but they cannot respond to you. The last thing that goes is your hearing. So I’m listening to the doctors say, ‘well, listen, we have to drill a hole inside of his head. We have to release the pressure on his brain. We have to put this chip or something inside so we can get the response from him that we want.’ And my brothers and them were like, ‘no, you’re not doing that.’ So they were telling me, ‘Dada, if you hear what they’re trying to do to you, move your hand. Move your right hand.’ And I couldn’t. I was stuck.

“I was screaming to the top of my lungs, no, do not let them do that to me. And I’m going to tell you something, my will to live superseded anything else. I really just focused on my hands, and I moved my hands, and they were like, ‘doc, look, he’s moving his hands! Move your other hand.’ And I moved my other hand.

“The doctors were like, ‘wow, it’s a miracle. Like, no, it’s God. You haven’t seen anything yet. And later that day, I’m laying back and my eyes just opened up a little bit, and then I actually opened them up. They had tubes and everything running down my throat. They had originally written me off.”

MMA Fighting reports that Harris attributed his kidney failure to Rhabdomyolysis, which was a result of dropping nearly 40 pounds in a couple months before his scheduled bout with Kimbo. Harris is still on dialysis due to renal failure.