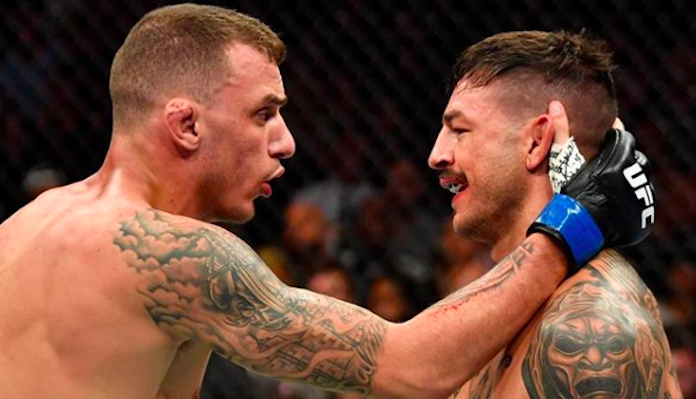 Unfortunately for Swanson and his loyal fans, this fight did not go as planned. Instead, the American fan favorite was tapped out by his adversary in the very first round.

Now on a three-fight losing streak, Cub Swanson is in a rather precarious spot — something he seems to sense himself. Speaking in a brief, post-fight statement on social media, Cub Swanson admitted that this latest loss “stings.” That said, Swanson also assured he’d “be back,” and took the time to congratulate his foil Moicano.

Damn it stings 🙁 but you can’t win them all. Congrats to @moicanoufc and his team on the win #ufc227 I’ll be back

“Damn it stings,” Swanson said in his short but sweet post-fight Tweet. “But you can’t win them all. Congrats to @moicanoufc and his team on the win #ufc227 I’ll be back.”

Cub Swanson’s next most recent losses came at the hands of Frankie Edgar, who he gave up a decision to, and top featherweight contender Brian Ortega, who he was submitted by. His last victory occurred in April of 2017, when he defeated Conor McGregor training partner Artem Lobov by decision. This win was preceded by a thrilling decision win in a Fight of the Year contender with Doo Ho Choi, and a pair of decision defeats of Tatsuya Kawajiri and Hacran Dias. Swanson is currently 25-10 overall.

What do you think the future holds for Cub Swanson after UFC 227?